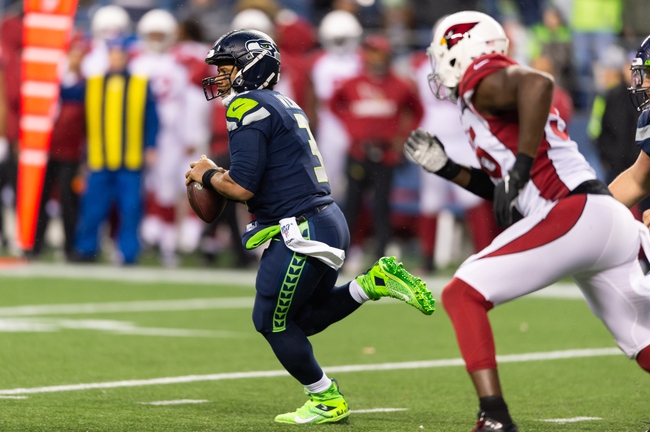 The Seattle Seahawks and the Arizona Cardinals meet in an NFC West division matchup in a Madden 20 NFL simulation game on Tuesday night.

The Seattle Seahawks will look to build off of a 39-13 win over the New York Giants last time out. Russell Wilson leads Seattle on offense with a strong 97 overall rating with 86 speed, 90 acceleration and 93 agility as well as 91 throwing power and 93 short pass accuracy, 94 medium pass accuracy and 96 deep pass accuracy. Tyler Lockett is Seattle’s top wide receiver with an 88 overall rating including 93 catching, 93 speed, 92 acceleration and 97 agility while Chris Carson also has an 86 rating in the Seahawks’ backfield with 88 speed, 89 acceleration and 91 stiff arm. On D, Bobby Wagner is Seattle’s best defender with a 98 overall rating, with 96 tackling, 90 impact blocking, 98 power, as well as high-90s attribute ratings in pursuit and play recognition. Jadeveon Clowney is right behind on the defensive line at 88 overall with 95 pursuit, 91 play recognition, 87 speed and 90 acceleration.

The Arizona Cardinals will look to bounce back from a 22-15 loss to Tampa Bay last time out. Larry Fitzgerald leads the Arizona offense at 83 overall at wide receiver with a 93 catch rating and 91 catching in traffic while Kenyan Drake sits at 81 overall in the Cardinals’ backfield with 91 speed, 89 acceleration, 90 agility and 87 carrying grades. Kyler Murray comes in as the Cardinals’ starting QB at 75 overall with 91 speed, 92 acceleration and 90 agility as well as 89 throwing power. On D, Chandler Jones leads the Arizona defense with a 90 overall rating, including 92 power move and an 86 tackle rating while Patrick Peterson is at 92 overall with 92 speed, 92 acceleration, 95 agility and 89 man coverage at cornerback.

I’m going to start sounding like a broken record for these sim games, saying that anything can happen and these games are more of a coin flip than one would think. However, Arizona just hasn’t been a good team in these sim games and they don’t have any real top-tier talent with their highest rated player being Larry Fitzgerald at 83 overall. Seattle has solid players left and right and are just the better team. I have a hard enough time laying double-digits in reality let alone a simulated game, but it’s Seattle laying the points or pass for me in this one.