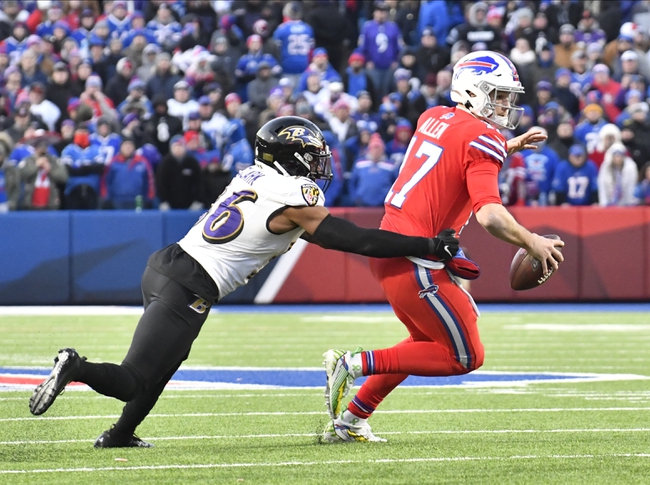 The Buffalo Bills and the Baltimore Ravens meet in a Madden 20 NFL simulation game on Tuesday afternoon.

The Buffalo Bills will look to bounce back from a 51-6 beatdown loss at the hands of Philadelphia last time out. Cole Beasley and John Brown lead the Bills on offense at the two wide receiver spots, coming in with an 83 overall rating, with Brown being the faster of the two in-game with 92 speed and 90 acceleration while Beasley is the more agile receiver with 92 agility. Frank Gore and Devin Singletary are the duo at running back for the Bills at 80 overall, while Josh Allen is at 77 overall as the Bills’ starting QB. On defense, the secondary is Buffalo’s strength with Micah Hyde and Tre’Davious White both at 88 overall, with White possessing 91 speed and 93 acceleration at cornerback while Hyde has a 91 zone coverage rating at free safety. Jordan Poyer is 85 overall at strong safety and Lorenzo Alexander is a decent 83 overall at one of the outside linebacker positions.

The Baltimore Ravens will look to bounce back from a 34-26 loss to the Green Bay Packers in their last game. Lamar Jackson leads Baltimore’s offense at starting QB with a 92 overall rating, with 92 throw power and 92 short pass accuracy to go along with 96 speed, 96 acceleration and 95 agility. Mark Ingram II comes in at 86 overall as Baltimore’s top running back with 88 speed, 91 acceleration and 89 carrying while Mark Andrews is not far off at tight end with an 85 overall rating. On defense, Earl Thomas III leads Baltimore with a team-high 93 overall rating, including 92 jumping and 96 zone coverage at free safety and Michael Pierce is a solid 91 overall on the defensive line with 94 block shedding and 90 impact blocking while Marlon Humphrey and Marcus Peters put together a strong cornerback duo at 89 and 85 overall for Baltimore. Humphrey owns a 90 man coverage rating as well as 92 speed and 93 acceleration while Peters has 87 man coverage, 91 speed and 91 acceleration.

Both of these teams are frustrating to figure out, as both are solid teams in reality, but the art hasn’t translated over from real life as both are inconsistent in these simulations. With that said, at least the Ravens are beating the teams they should, and while Buffalo had that win over Houston, they’ve been disappointing for the most part and just got obliterated by the Eagles. I’m not trying to bet this one, but if forced to pick, I’d lay the points with Baltimore here.