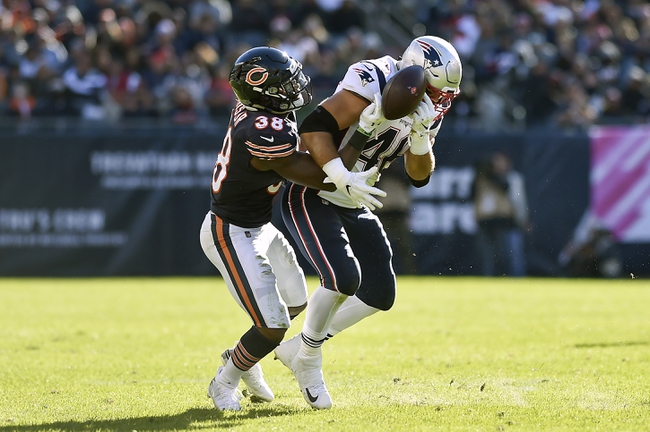 The New England Patriots and the Chicago Bears meet in a Madden 20 NFL simulation game on Tuesday night.

The New England Patriots come into this game fresh off of a hard-fought sim game against the Atlanta Falcons where they cruised from beginning to end. Tom Brady leads New England’s offense at QB with a 91 overall rating with 90 throw power and 96 short pass accuracy while Julian Edelman is the leading receiver in the Patriot offense at 87 overall with 91 acceleration, 91 agility and 85 catching. James White leads the Pats’ running back group at 83 overall with 89 speed, 92 acceleration and 90 agility. On the D, Stephon Gilmore leads the Patriots with a 98 overall rating with 99 awareness and 92 speed with 94 acceleration and 94 agility while also rated at 98 in man coverage and 96 in zone coverage. Devin McCourty is New England’s second-highest rated DB at 92 overall with 93 zone coverage and 90 marks across the board in speed, agility and acceleration. Dont’a Hightower leads New England’s linebacking group at 88 overall with 91 impact blocking and 92 tackling in addition to 93 play recognition and 93 pursuit.

The Chicago Bears will look to build on a 39-17 win over the Tampa Bay Buccaneers in their last game. Allen Robinson II leads Chicago on offense with an 89 overall rating with 90 speed and 93 acceleration as well as 96 catching while Trey Burton is at 82 overall at tight end and Taylor Gabriel is on the other side at wide receiver with an 81 overall rating. Tarik Cohen leads the Bears’ backfield at 78 overall while Mitch Trubisky is still the Bears’ starting QB at 73 overall. On defense, Khalil Mack leads Chicago with a stacked 98 overall rating, with 87 speed and 89 acceleration along with 94 tackling, 90 impact blocking, 91 block shedding, 91 finesse move and 95 power move. Eddie Jackson is at 89 overall at free safety with a 94 grade in zone coverage and 90 acceleration while Kyle Fuller has 92 speed and acceleration at cornerback with 91 zone coverage and Akiem Hicks is at 88 overall at left defensive end with 91 block shedding and 89 power move.

The Bears got me against the Bucs as Chicago just took control from beginning to end. However, that’s a rare occurrence with the Bears in these sim games, and while anything can happen, New England is simply the better team here and the defense finally looked good against the Falcons. I just think this is a time where you don’t overthink it and take the better team, so I’ll lay the points with New England here.