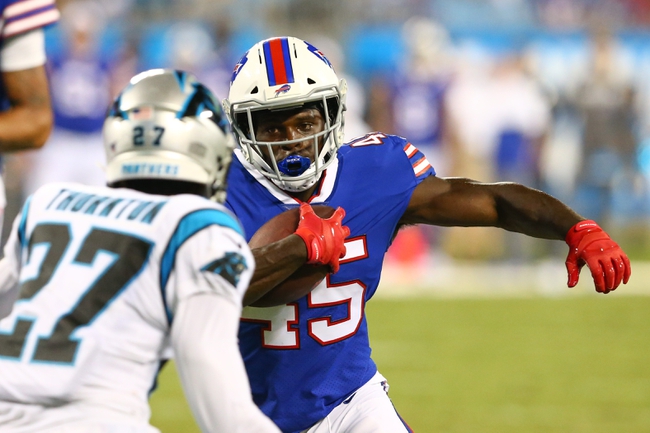 The Carolina Panthers and the Buffalo Bills meet in a Madden 20 NFL simulation game on Wednesday afternoon.

The Carolina Panthers will look to build on a 44-31 win over the New Orleans Saints in their last game. Carolina is arguably the luckiest team in this year’s Madden as the only team with two of the game’s five players with a 99 overall rating, and they have one on each side of the ball. Christian McCaffrey leads the offense for the Panthers with 92 speed, 93 acceleration and 97 agility as well as 98 carrying and 96 juke. Greg Olsen is 88 overall at tight end with 93 catching and 93 catching in traffic while D.J. Moore comes in at 85 overall with 93 speed and acceleration and 81 catching at wide receiver. Cam Newton’s healthy in the game, but his overall rating is still down to 79 yet he still remains the starting QB for the Panthers. On D, Luke Kuechly holds onto the other 99 rating at linebacker, with 90 jumping, 91 impact blocking and 99 tackling as well as 99 play recognition and 96 pursuit. After Kuechly, Gerald McCoy and Kawann Short anchor the defensive line at 85 and 84 overall, with both possessing strength and impact blocking ratings in the low-90s.

The Buffalo Bills will look to rebound from a narrow 20-17 loss to Baltimore last time out. Cole Beasley and John Brown lead Buffalo’s offense at the two wide receiver spots, coming in at 83 overall, with Brown being the faster of the two in-game with 92 speed and 90 acceleration while Beasley is the more shifty receiver with 92 agility. Frank Gore and Devin Singletary are the lead duo at running back for the Bills at 80 overall, while Josh Allen is at 77 overall as the Bills’ starting QB. On defense, the secondary is Buffalo’s greatest strength with Micah Hyde and Tre’Davious White both at 88 overall, with White possessing 91 speed and 93 acceleration at cornerback while Hyde has a 91 zone coverage rating at free safety. Jordan Poyer is 85 overall at strong safety and Lorenzo Alexander is a decent 83 overall at one of the outside linebacker positions.

These are two teams that are hard to figure out, as the Panthers have cooled off from their hot start in the sim games and Buffalo’s been disappointing but next thing you know they go and cover against Baltimore. Either way, I just think that the Panthers are the better team with better players and have put forward more positive results than Buffalo has. I’ll lay the points with the Panthers here.