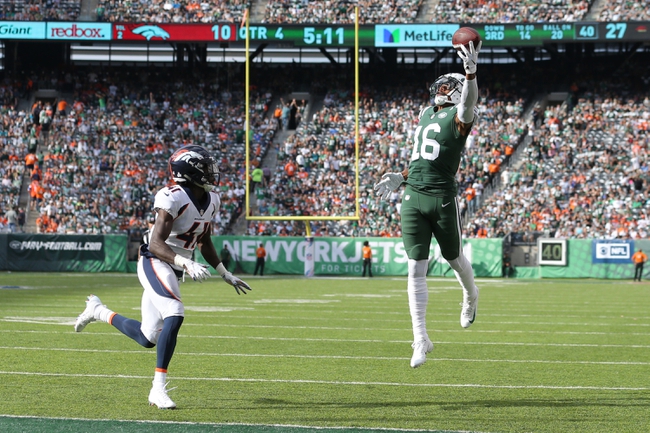 The New York Jets and the Denver Broncos meet in a Madden 20 NFL simulation game on Wednesday night.

The New York Jets will look to rebound from a 31-10 loss to New England last time out. Le’Veon Bell leads the Jets’ offense at 88 overall, including 89 speed, 92 acceleration and 95 agility as well as 88 carrying and 91 juke. Robby Anderson leads New York’s receiving corps at 84 overall with 91 catching while Sam Darnold is rated 74 overall as the Jets’ starting QB. On the defense, Jamal Adams leads the Jets with a 92 overall rating, with 95 power and 92 zone coverage as well as 91 speed and 90 acceleration. The Jets also possess a pair of 85 overall rated middle linebackers in C.J. Mosley and Avery Williamson, with both boasting 89 acceleration and Mosley having 91 tackling while Williamson has 86 block shedding.

The Denver Broncos will look to rebound from a 31-17 loss to Atlanta last time out. Phillip Lindsay leads the Broncos on offense with an 85 overall rating at running back with 93 carrying as well as 93 speed and 91 acceleration. Courtland Sutton is right behind as Denver’s top receiver with 89 speed, 92 acceleration and 92 catching as part of his 84 overall rating. On D, Von Miller leads the Broncos with a team-high 96 overall rating, including 93 tackling, 89 impact blocking, 90 finesse move and 93 power move. Chris Harris Jr. is at DB at 90 overall with a 91 man coverage rating and 90 speed. Justin Simmons and Kareem Jackson make up a strong combination in the Denver secondary at 89 and 87 overall.

The Jets had a strong start to these sim games but have since cooled off and we’ve seen them get blown out in their last couple of games, scoring just 10 points in each while allowing 30+. Denver hasn’t been great in their own right and the home field doesn’t play a factor in the video game, but the Broncos have had a good string of play lately and I just think they’re the play here so I’ll side with Denver in this pick ‘em.