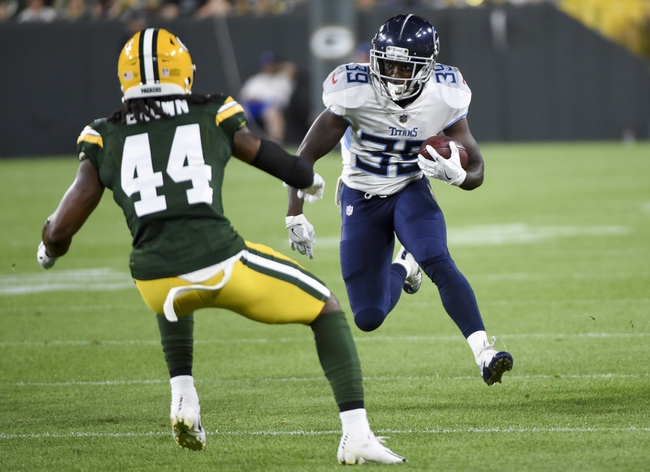 The Tennessee Titans and the Green Bay Packers meet in a Madden 20 NFL simulation game on Wednesday night.

The Tennessee Titans will try to build on a 26-6 sim victory over Buffalo from their last game. Derrick Henry leads the Titans with a 91 overall rating with 91 speed, 87 strength, 91 carrying and 98 stiff arm while Delanie Walker sits at 86 overall as the Titans’ top pass catcher and tight end with 86 catching. A.J. Brown and Corey Davis make up a formidable tandem at wide receiver despite being rated just 80 and 79 overall respectively, while Ryan Tannehill comes in at 80 overall at starting QB for the Titans. On the defensive side, Kevin Byard shares the team-high on the defensive end at 91 overall with 93 zone coverage and 90 speed while Logan Ryan is at 86 overall at cornerback with 87 speed, 91 acceleration and 90 agility with 92 play recognition. Jurrell Casey also checks in at 85 overall at right defensive end with 92 play recognition, 89 tackling and 89 impact blocking as well as 92 strength.

The Green Bay Packers will look to build on a 34-26 win over Baltimore last time out. Davante Adams leads the Packers on the offensive end at 94 overall, with 94 catching and 94 catching in traffic while also possessing 89 speed and 92 acceleration. Aaron Rodgers starts at QB with an 89 overall rating, with 94 throwing power, 90 short pass accuracy and ratings in the high-80s in medium and deep pass accuracy while Aaron Jones leads Green Bay’s rushing attack with an 87 overall attribute rating with 93 carrying, 92 juke, 91 speed and 93 acceleration. On D, Kenny Clark leads the Pack’s pass rush at 90 overall with 95 strength with 92 block shedding and 89 power moves while Jaire Alexander is not far off at 89 overall to lead the Green Bay secondary at cornerback, with 92 man coverage in addition to 93 ratings in speed and acceleration with 94 agility. Za’Darius Smith and Adrian Amos come in at 88 and 87 overall respectively as well as a pair of key pieces in a loaded Green Bay defense.

I’m a bit alarmed that Green Bay led Baltimore 31-6 at the half in their win and while it sounds dumb to say that the CPU took their foot off the gas for Green Bay, it felt like that’s what happened. Even still, outside of Derrick Henry and Delanie Walker, I just don’t see the Titans having enough to keep pace with the Packers here. Green Bay’s had enough of a strong sample size of positive results in these sim games to make it reasonable to lay the points with Green Bay here.