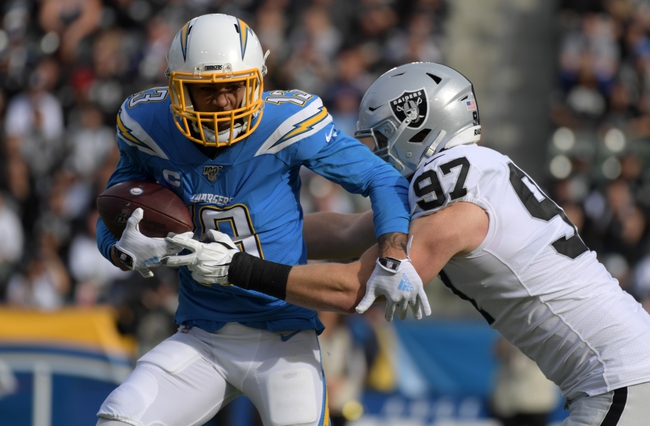 The Dallas Cowboys and the Los Angeles Chargers meet in a Madden 20 NFL simulation game on Thursday night.

The Dallas Cowboys will look to rebound from a 27-20 loss to the Kansas City Chiefs last time out. Ezekiel Elliott leads the Cowboys’ offense, rated 93 overall at starting RB with 90 speed, 91 acceleration and 95 agility while Amari Cooper leads the Cowboys’ receiving group at 91 overall with 92 speed, 96 agility and 89 catching. Dak Prescott has an 81 overall rating center at starting QB with 87 throwing power and 88 short pass accuracy. The Cowboys also have some beef on their offensive line, with Zack Martin boasting a team-high 97 overall rating while Tyron Smith is at left tackle at 91 overall. On the defense, Byron Jones and Demarcus Lawrence lead the Cowboys’ defense, each at 88 overall apiece, with Lawrence owning a 93 finesse move rating, 89 power move and 88 block shedding rating while Jones has 92 speed, 94 acceleration and 96 agility to go along with an 84 man coverage rating and 90 zone coverage rating in the Dallas secondary.

The Los Angeles Chargers will look to build on a 47-24 win over the same Kansas City Chiefs last time out. Keenan Allen leads the Chargers at 92 overall with 90 catching and 94 catching in traffic in addition to 89 speed, 92 acceleration and 92 agility. Hunter Henry is the Chargers’ top tight end at 87 overall with 89 catching as well. Melvin Gordon III and Philip Rivers are no longer with the Chargers in reality anymore, but they’re on the team here at 84 overall with Gordon rated at 92 speed and 92 agility with 90 carrying and 90 juke while Rivers has 94 short pass accuracy and 92 medium pass accuracy. On defense is where the Chargers are keeping their top-rated players with Joey Bosa leading the pass rush at 91 overall with 90 impact blocking as well as 97 finesse move and 87 strength while Casey Hayward Jr. is at 91 overall in the secondary with 91 acceleration and 92 agility in addition to 89 speed and 90+ ratings in man coverage and zone coverage. Melvin Ingram III and Derwin James Jr. each come in at 88 overall on the defensive end for the Chargers.

I get the Cowboys being favored here, and a loss to the Chiefs isn’t much to sneeze at either. However, while it’s not a good idea to compare wins and losses against common opponents, the Chargers hung around with Kansas City the first time they played and destroyed them in the last meeting. On the other side, Dallas is strong, but they lost to the Chiefs. I’m not saying that the Chargers are better than the Cowboys, but I do think that L.A. keeps up here, so I’ll take the Chargers and the points here.

The pick in this article is the opinion of the writer, not a Sports Chat Place site consensus.
Previous Pick
Dallas Cowboys vs. Washington Redskins - 4/30/20 Madden20 NFL Sim Pick, Odds, and Prediction
Next Pick
Aaron Rodgers Rumors: Five Teams That Should Trade For Quarterback