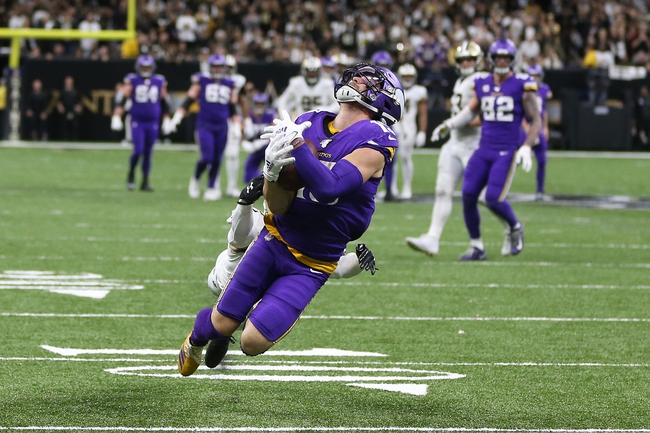 The Houston Texans and the Minnesota Vikings meet in a Madden 20 NFL simulation game on Thursday afternoon.

The Houston Texans will try to rebound from a 3rd straight sim loss after a 36-23 loss to the Los Angeles Rams last time out. DeAndre Hopkins leads Houston at 98 overall in the game with 98 catching as well as 99 marks in catching in traffic, spectacular catch, release and jumping with 92 speed, 93 acceleration and 92 agility. Deshaun Watson is rated at 86 overall at starting QB with 88 acceleration, 84 speed and 89 throw power while Lamar Miller is close behind at 84 overall at starting running back with 91 carrying, 89 juke, 92 speed, 91 agility and 91 acceleration. On defense, J.J. Watt leads at 97 overall with 97 strength, 94 impact blocking, 97 tackling, 93 finesse move and 94 power move. D.J. Reader and Justin Reid also come in at 84 overall for the Texans’ defense with Reader on the defensive front and Reid in the secondary.

The Minnesota Vikings will look to build on their 4th straight sim win after a 44-20 win over Washington last time out. Stefon Diggs isn’t with Minnesota anymore, but he’s still a Viking in this game with a 93 overall rating with 92 catching, 91 speed, 93 acceleration and 93 agility. Adam Thielen has a 91 overall rating at the other wide receiver spot with 90 speed and 93 grades in acceleration and agility as well. Thielen also has 95 catching and 90 catching in traffic. Dalvin Cook leads the Vikings’ ground attack at 90 overall with 91 speed, 92 acceleration and 94 agility while Kyle Rudolph is an 84 overall rated tight end and Kirk Cousins is 84 overall at starting QB. On D, Harrison Smith leads Minnesota at 95 overall with 93 power, 92 zone coverage, 95 play recognition and 93 pursuit. The Vikings have a group of 90 overall rated defenders, with Everson Griffen and Danielle Hunter bookending the D-line while Eric Kendricks hunkers down the linebacking corps. Linval Joseph also sits at 86 overall in the middle of the defensive line.

I know these games are just simulations, and anything can happen and it feels weird to say this about a CPU vs. CPU game. However, with that said, the Vikings continue to get no respect with these lines. Minnesota’s quietly won 4 straight sim games and are covering left and right and also providing solid value in the underdog role. The defense has been playing well and with Diggs still in the lineup here, the roster is loaded. Houston’s solid as well with Hopkins and Watt, but the Texans have stumbled here and there. I’ll take the free points with the more consistent sim team and to me that’s Minnesota.