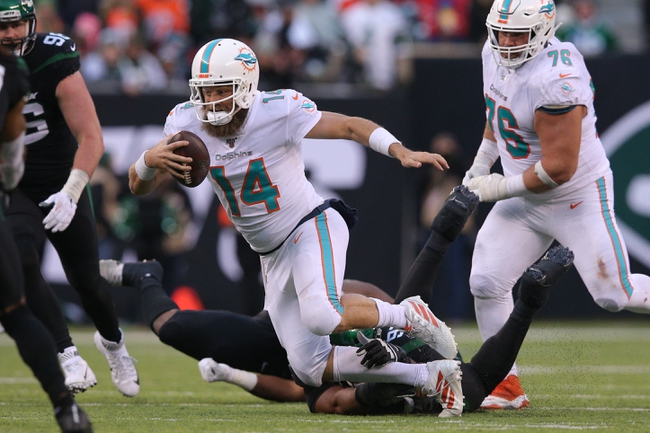 The Miami Dolphins and the New York Jets meet in an AFC East division matchup in a Madden 20 NFL simulation game on Thursday afternoon.

The Miami Dolphins will try to rebound from back-to-back sim losses after a 39-36 loss to Detroit in their last game. Devante Parker leads Miami with an 84 overall rating, including 91 speed and 91 acceleration while Albert Wilson is at 76 overall at another wide receiver spot with 91 speed and acceleration as well. Ryan Fitzpatrick leads the charge at QB for Miami, but only at a 74 overall rating. On the defensive end, three of Miami’s four 80+ rated overall players are all in the secondary, with Xavien Howard and Aqib Talib at 82 and 81 overall with Howard owning 92 speed and 92 acceleration while Talib has 91 acceleration and 91 agility. Reshad Jones is also at 82 overall at strong safety with 86 speed and 89 acceleration.

The New York Jets come into this one fresh off of a strong performance against the Denver Broncos on Wednesday night. Le’Veon Bell leads New York’s offense at 88 overall, including 89 speed, 92 acceleration and 95 agility as well as 88 carrying and 91 juke. Robby Anderson leads the Jets’ receiving corps at 84 overall with 91 catching while Sam Darnold is rated 74 overall as New York’s starting QB. On the defensive side, Jamal Adams leads the Jets with a 92 overall rating, with 95 power and 92 zone coverage as well as 91 speed and 90 acceleration. The Jets also possess a pair of 85 overall rated middle linebackers in C.J. Mosley and Avery Williamson, with both boasting 89 acceleration and Mosley having 91 tackling while Williamson has 86 block shedding.

The Dolphins have shown in some of these sim games that there’s some promise there with the roster that they had, but these are still simulation games and everyone has a good game now and again. The Jets on the other hand, easily had 33 points in the first half against the Broncos and while the Jets could come out here with a dud, and momentum isn’t a thing in these sim games, I’m more comfortable thinking that the Jets could bring it offensively, enough to win and get a cover in this near pick ‘em. I’ll lay the point the Jets here.