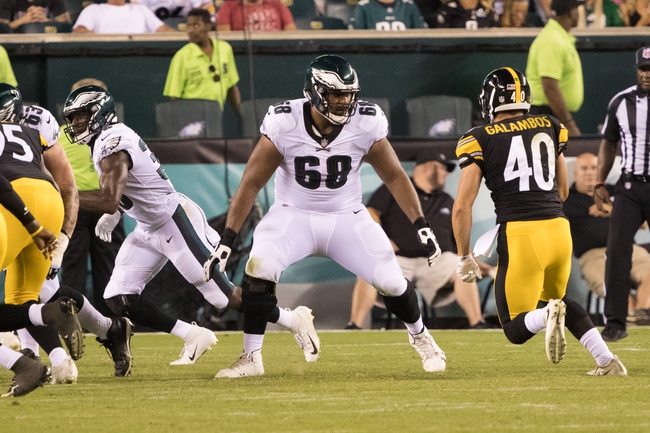 The Philadelphia Eagles and the Pittsburgh Steelers meet in an all-Pennsylvania matchup in a Madden 20 NFL simulation game on Thursday night.

The Philadelphia Eagles will look to build on back-to-back sim wins after a 51-6 win over Buffalo in their last game. Zach Ertz leads Philadelphia’s offense at tight end, rated 90 overall with 87 acceleration and 93 catching while Alshon Jeffery and DeSean Jackson make up the Eagles’ top wide receiver duo at 85 and 84 overall respectively. Carson Wentz is starting at QB for Philadelphia at 83 overall while the Eagles top players are on the right side of their offensive line with Jason Kelce at center with a 94 overall rating, Brandon Brooks at 93 overall at right guard and right tackle Lane Johnson at 89 overall. On the defensive end, Fletcher Cox leads Philadelphia at 95 overall with 95 strength, 93 tackling and 96 power move while Brandon Graham is right defensive end at 87 overall with 90 power move and 93 impact blocking. Malcolm Jenkins leads the Eagles’ secondary at 86 overall with 91 acceleration, 90 agility and 88 zone coverage.

The Pittsburgh Steelers will try to bounce back from a 19-13 loss to Washington last time out. JuJu Smith-Schuster leads the Steelers’ offense at wide receiver with an 86 overall rating, which includes a rating of 91 speed and 92 acceleration as well as 90 catching and 93 catching in traffic while James Conner starts at RB with an 81 overall rating with 86 speed, 89 acceleration and 89 carrying. Ben Roethlisberger is starting at QB with an 81 overall rating with 89 throwing power and 89 short passing accuracy. On D, Cameron Heyward leads the Steelers at 90 overall with 93 strength, 91 tackling and 92 power move while Stephon Tuitt is on the other side of the front at 87 overall with 90 block shedding and 91 strength.

I was considering the Steelers and the points, but the problem is that for as well as Pittsburgh had been playing as of late, that loss to Washington really stunk. It may be just a simulation and a one off, but still. On the other hand, Philadelphia’s beat up on the weaker teams they’ve played, but they’ve also stumbled. Instead, I’m going to side with the over as both teams have shown that they can put points up and I think each side is capable of 30 points in this one. I could see this being a 34-31 or 35-31 game so I’ll take the over.