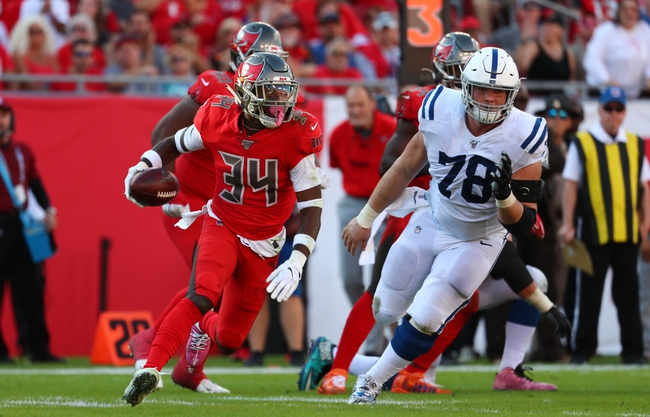 The Tampa Bay Buccaneers and the Indianapolis Colts meet in a Madden 20 NFL simulation game on Friday afternoon.

The Tampa Bay Buccaneers will look to build on a 22-15 win over Arizona in their last game. Mike Evans and Chris Godwin lead Tampa Bay’s offensive unit as well as the receiving group as well with Evans owning a team-leading 92 overall rating with 90 catching, 95 catching in traffic and 97 spectacular catch while Godwin is 87 overall with 97 catching. Jameis Winston comes in at 78 overall at starting quarterback for Tampa Bay in this year’s edition of the game. On the defense, Lavonte David is Tampa Bay’s leading linebacker with a 90 overall rating, with 92 pursuit, 87 block shedding, 88 impact blocking and 89 tackling. Ndamukong Suh is lined up front at 86 overall with 93 impact blocking and Vita Vea is right behind alongside at 85 overall with 91 impact blocking.

The Indianapolis Colts will look to rebound from a 30-13 loss to San Francisco last time out. T.Y. Hilton leads the Colts on offense with an 88 overall rating, with 93 speed as well as 95 agility and 91 acceleration. Indy also have some solid beef up front with four offensive linemen with at least an 80 overall rating, led by Quenton Nelson who has a team-high 94 overall rating with a 99 awareness rating as well as 97 strength and 92 run blocking. On defense, Justin Houston leads the Colts at 86 overall, including a 93 mark in play recognition while Darius Leonard sits at one of the outside linebacker spots with an 85 overall rating including an 88 rating in tackling.

The points with the Buccaneers are tempting, but Tampa Bay’s had a couple of blips in their sim play lately. If you look at the Colts during their play, their losses have come to pretty good teams like New Orleans and New England, and the Colts have also beaten some solid teams like Houston and Green Bay. I’ll lay the points with Indianapolis here.

The pick in this article is the opinion of the writer, not a Sports Chat Place site consensus.
Previous Pick
Aaron Rodgers Rumors: Five Teams That Should Trade For Quarterback
Next Pick
Detroit Lions vs. Chicago Bears - 5/1/20 Madden20 NFL Sim Pick, Odds, and Prediction