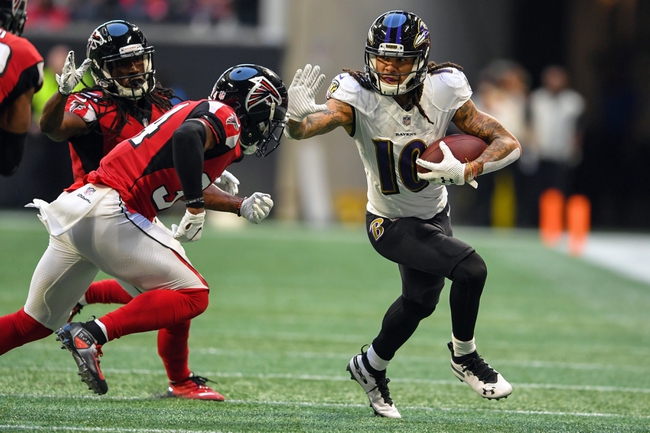 The Baltimore Ravens and the Atlanta Falcons meet in a Madden 20 NFL simulation game on Saturday night. CLICK HERE TO BET THIS NFL Sim Game

The Baltimore Ravens come into this game looking to build on a narrow 20-17 win over Buffalo last time out. Lamar Jackson leads Baltimore’s offense under center with a 92 overall rating, with 92 throw power and 92 short pass accuracy to go along with 96 speed, 96 acceleration and 95 agility. Mark Ingram II comes in at 86 overall as Baltimore’s top running back with 88 speed, 91 acceleration and 89 carrying while Mark Andrews is not far off at tight end with an 85 overall rating. On D, Earl Thomas III leads Baltimore with a team-high 93 overall rating, including 92 jumping and 96 zone coverage at free safety and Michael Pierce is a solid 91 overall on the defensive line with 94 block shedding and 90 impact blocking while Marlon Humphrey and Marcus Peters put together a strong cornerback duo at 89 and 85 overall for Baltimore. Humphrey owns a 90 man coverage rating as well as 92 speed and 93 acceleration while Peters has 87 man coverage, 91 speed and 91 acceleration.

The Atlanta Falcons will try to bounce back from a 34-17 loss to New England in their last game. Julio Jones leads the Falcons with a 97 overall rating, with 92 speed and 94 agility to go along with 96 catching, 95 catching in traffic and 98 spectacular catch. Austin Hooper’s rated 89 overall at tight end with 97 catching while Matt Ryan comes in at 87 overall at QB and Devonta Freeman leads the Falcons’ ground attack with an 85 overall rating with 92 speed and 94 agility. On defense, Grady Jarrett leads Atlanta rated 90 overall with 89 strength, 90 block shedding and 93 power move while Deion Jones is the Falcons’ top linebacker at 86 overall with 89 pursuit, 90 speed and 91 acceleration. Keanu Neal and Desmond Trufant lead the Falcons’ secondary at 85 and 84 overall respectively with Trufant logging 92 speed, 93 acceleration and 96 agility.

I’ve gone back and forth on this game, as I really do think it’s a coin flip and I haven’t been overly impressed with what I’ve seen from either side. However, while Baltimore’s defense is stacked, the Ravens have let some teams just hang around and Atlanta has talented offensive players on the roster still, with guys like Jones, Hooper and Freeman that can keep Atlanta in the game. This is the game I’m least confident in on Saturday’s card, but I’ll take a shot with Atlanta and the points here. CLICK HERE TO BET THIS NFL Sim Game