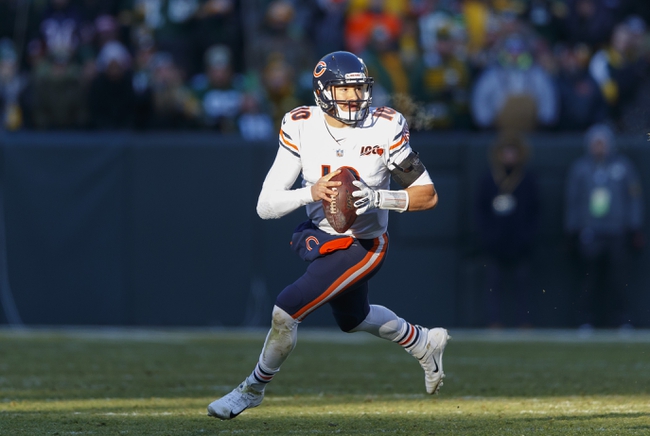 Who Will Be The Chicago Bears Starting Quarterback?

One of the interesting quarterback controversies entering the 2020 NFL season is with the Chicago Bears, as Mitch Trubisky has completion now with the signing of veteran Nick Foles. It’s the first clear sign that the Bears may be giving up on their first pick of the 2017 NFL draft. Still, there’s betting odds available for this situation and that means there’s money to be made.

Here is handicapping the Bears quarterback situation with the latest odds.

Nick Foles, -480 - Nick Foles is playing for his third team in the last three years and his three-year contract worth 24 million dollars suggest the Bears are completely invested. The problem is outside of that Super Bowl run he had with the Philadelphia Eagles, Foles has been an average quarterback who hasn’t been able to sustain success. Foles is 26-22 for his career with a 61.9 completion percentage, 11,901 yards, 71 touchdowns and 35 interceptions. In his last 12 starts, Foles is 6-6 with a 66.6 completion percentage, 15 touchdowns and eight interceptions. Foles has started double-digit games just twice in eight seasons and has had double-digit passing touchdowns twice as well. Yes, Foles was the starting quarterback on a Super Bowl winning team and he has shown flashes throughout his career, but there’s also reasons for concern given the lack of consistency.

Mitchell Trubisky, +280 - Mitchell Trubisky simply hasn’t lived up to the hype considering the Bears traded up to get him out of North Carolina. In three seasons, Trubisky is 23-18 with a 63.4 completion percentage, 8,554 yards, 48 touchdowns and 29 interceptions. Trubisky also has rushing yards and seven rushing touchdowns. Last season, Trubisky had 17 passing touchdowns and 10 interceptions. Trubisky and his 83 QBR last year was 28th in the league. It’s just not been good enough, especially when Patrick Mahomes and Deshaun Watson, two quarterbacks drafted after Trubisky, look like franchise changing quarterbacks. Trubisky has had 41 starts to show the Bears something, and he just hasn’t provided enough in a decent sized sample size that convinces anyone he’s an NFL caliber starting quarterback.

Pick: The Bears are calling this an open competition and they should be open to giving Trubisky as many chances as possible to prove himself, as they did trade four picks to move up to select him. Trubisky is still their asset that they shouldn’t give up on as long as he’s on the roster. The problem is Foles didn’t come cheap and that’s usually a clear sign who they’re learning toward right off the bat. The Bears also recently declined the fifth year option on Trubisky’s contract, making him a free agent at the end of this season. The writing appears to be on the wall in Chicago and things aren’t going to change unless Trubisky plays drastically improved football in training camp and throughout the preseason. All of that is highly unlikely based on what we’ve seen the last three years.

Foles is the starting quarterback for the Chicago Bears.