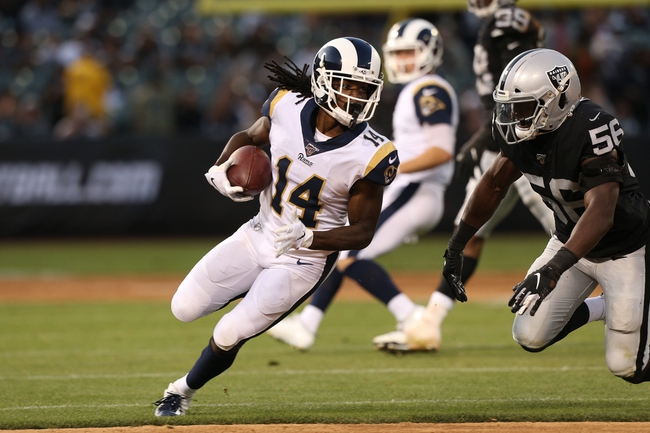 The Los Angeles Rams and the Las Vegas/Oakland Raiders meet in a Madden 20 NFL sim on Sunday night.

The Los Angeles Rams will look to build off of a 36-23 win over the Houston Texans in their last game. Cooper Kupp leads the Rams’ offense and receiving group with an 87 overall rating with 94 agility and 95 catching while Robert Woods is close behind with an 86 overall mark including 94 catching and Brandin Cooks follows at 85 overall with 95 speed, 92 acceleration and 95 agility. Todd Gurley II leads Los Angeles’ ground attack at 86 overall with 91 speed and 91 acceleration as well as 95 agility and 89 carrying. On D, Aaron Donald is one of the s five highly-touted 99 overall rated players with 90 acceleration, 99 power move, 96 finesse move, 97 block shedding, 93 impact blocking and 92 tackling. Jalen Ramsey leads the Rams’ secondary at 94 overall with 95 man coverage and 95 zone coverage with 92 speed, 93 acceleration and 90 agility.

The Las Vegas/Oakland Raiders will look to build off a 29-22 win over the Arizona Cardinals in their last game. The Raiders have some beef on the offensive line with Rodney Hudson at 93 overall, Richie Incognito at 87 overall and Trent Brown at 86 overall. Josh Jacobs and Darren Waller each have 85 overall ratings, with Jacobs owning 96 carrying and 91 acceleration at running back while Waller has 89 speed, 89 acceleration and 96 catching at tight end. Tyrell Williams is Las Vegas/Oakland’s top wide receiver at 82 overall with 92 speed, 93 acceleration and 95 agility. Derek Carr remains the Raiders’ starting QB with an 80 overall rating. On the defensive end, Lamarcus Joyner comes in with an 83 overall rating, including 88 speed and 92 acceleration, but after Joyner, every defender on the Raiders owns a 79 overall rating or lower.

A touchdown feels like a lot to lay in a simulation game, and if I’m being 100% honest, I feel as comfortable backing the Rams in a simulation as I do backing them in reality. However, the Rams are simply the better team from top to bottom, especially on defense, and while the Raiders have shown that they can put some points on the board, the Raiders just don’t have the horses to keep pace defensively. I’ll lay the points with the Rams here.