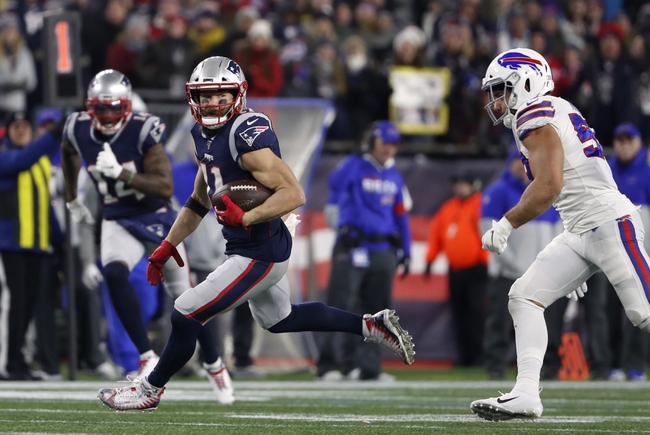 The San Francisco 49ers and the New England Patriots meet in a Madden 20 NFL simulation game on Sunday night.

The San Francisco 49ers will look to build on a 30-13 win over the Indianapolis Colts in their last game. George Kittle leads the offense for the Niners as a 97 overall rated tight end with 98 catching while Emmanuel Sanders comes in as the top wide receiver for the 49ers at 89 overall with 94 catching, 92 acceleration and 93 agility. Jimmy Garoppolo is starting QB for San Francisco at 84 overall while Tevin Coleman is right behind at running back at 82 overall with 93 speed, 92 acceleration and 93 agility. On defense, Richard Sherman leads San Francisco at 94 overall at cornerback, with 99 awareness as well as 98 jumping, 90 man coverage and 99 zone coverage. Nick Bosa leads the 49ers’ pass rush at 89 overall with 91 finesse move and 91 acceleration. The San Francisco defense also has four additional defenders with at least an 85 overall rating, including Arik Armstead, DeForest Buckner, Dee Ford and Fred Warner.

The New England Patriots will look to build on back-to-back wins after a 36-9 win over Chicago last time out. Tom Brady leads the Patriot offense at QB with a 91 overall rating with 90 throw power and 96 short pass accuracy while Julian Edelman is the leading receiver in the Patriot offense at 87 overall with 91 acceleration, 91 agility and 85 catching. James White leads the New England running back group at 83 overall with 89 speed, 92 acceleration and 90 agility. On the defensive side, Stephon Gilmore leads the Patriots with a 98 overall rating with 99 awareness and 92 speed with 94 acceleration and 94 agility while also rated at 98 in man coverage and 96 in zone coverage. Devin McCourty is New England’s second-highest rated defensive back at 92 overall with 93 zone coverage and 90 marks across the board in speed, agility and acceleration. Dont’a Hightower leads New England’s linebacking corps at 88 overall with 91 impact blocking and 92 tackling in addition to 93 play recognition and 93 pursuit.

I think you could make a case for either side, and I could give the Niners a slight edge based on the fact that their defense has shown up more frequently than New England’s has. However, you can’t count New England out either in these sim games just like in real life. Instead, I’m going to side wth the over. These sim games can be high scoring at times and 55 points seems light for two teams that seem to hit 30+ points with regularity more often than not in these sims.