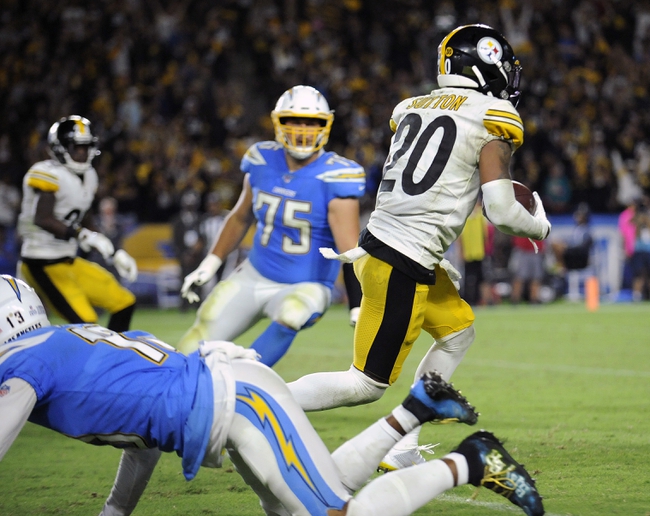 The Pittsburgh Steelers and the Los Angeles Chargers meet in a Madden 20 NFL simulation game on Monday night.

The Pittsburgh Steelers will try to build on back-to-back sim victories after a 34-16 win over Detroit in their last outing. JuJu Smith-Schuster leads the Steelers’ offense at wide receiver with an 86 overall rating, which includes a rating of 91 speed and 92 acceleration as well as 90 catching and 93 catching in traffic while James Conner starts at RB with an 81 overall rating with 86 speed, 89 acceleration and 89 carrying. Ben Roethlisberger is starting QB with an 81 overall rating with 89 throwing power and 89 short passing accuracy. On D, Cameron Heyward leads the Steelers at 90 overall with 93 strength, 91 tackling and 92 power move while Stephon Tuitt is on the other side of the front at 87 overall with 90 block shedding and 91 strength.

The Los Angeles Chargers will look to rebound from a 29-19 loss to the Philadelphia Eagles in their last game. Keenan Allen leads the Chargers at 92 overall with 90 catching and 94 catching in traffic in addition to 89 speed, 92 acceleration and 92 agility while Hunter Henry is the Chargers’ top tight end at 87 overall with 89 catching as well. Melvin Gordon III and Philip Rivers aren’t on the Chargers in reality anymore, but they’re still on L.A. in the game at 84 overall with Gordon rated at 92 speed and 92 agility with 90 carrying and 90 juke while Rivers has 94 short pass accuracy and 92 medium pass accuracy. On defense is where the Chargers have their top-rated players with Joey Bosa leading the pass rush at 91 overall with 90 impact blocking as well as 97 finesse move and 87 strength while Casey Hayward Jr. is at 91 overall in the secondary with 91 acceleration and 92 agility in addition to 89 speed and 90+ ratings in man coverage and zone coverage. Melvin Ingram III and Derwin James Jr. each come in at 88 overall on the defensive end for the Chargers.

When this game was first scheduled, I expected to have a hard time with the line as both teams have been kind to me during these sim games, and the line being a pick 'em doesn't help sway me one way or another. Instead, I'm going to side with the over here. Both sides are hitting 30+ points often in these sim games, and 51.5 just seems really lot for a game I could easily see hitting 60 points or maybe just under, but either way I expect the over to hit here without a hitch.