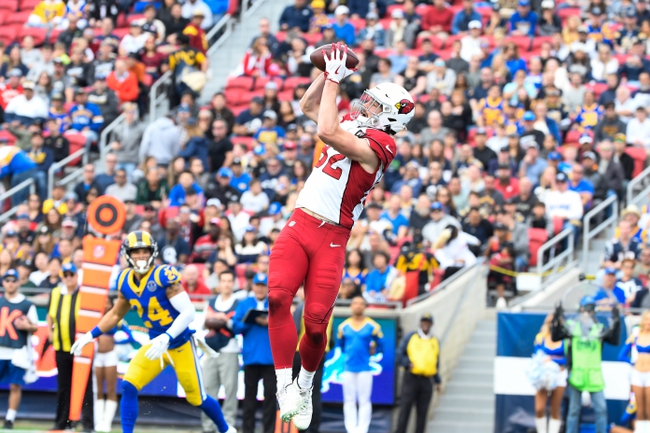 The Cleveland Browns and the Arizona Cardinals meet in a Madden 20 NFL simulation game on Tuesday afternoon.

The Cleveland Browns will look to build on back-to-back sim victories after a 26-24 win over Arizona last time out. Nick Chubb leads the Browns on offense with a 92 overall attribute rating, with 92 speed, 91 acceleration and 85 strength grades. Odell Beckham Jr. is the #1 receiver for the Browns, rated at 90 overall with a 99 rated spectacular catch as well as 91 in catching in traffic and a 98 mark in ball carrier vision while also having 94 ratings in speed and acceleration and 98 agility. Kareem Hunt is rated at 88 overall at running back, with 90 speed and 92 acceleration and 92 agility along with a 98 carrying rating. Baker Mayfield grades at 76 overall starting at QB, including 93 throwing power, 87 short pass accuracy and 85 long ball accuracy. On defense, Myles Garrett is the leader with a team-high 93 overall rating at defensive end, with 85 speed, 90 acceleration and 96 strength as well as a 95 power move rating.

The Arizona Cardinals will be out to snap a five-game sim losing streak after a 37-31 loss to the Chargers in their last game. Larry Fitzgerald leads Arizona’s offense at 83 overall at wide receiver with a 93 catch rating and 91 catching in traffic while Kenyan Drake sits at 81 overall in the Cardinals’ backfield with 91 speed, 89 acceleration, 90 agility and 87 carrying grades. Kyler Murray is Arizona’s starting quarterback at 75 overall with 91 speed, 92 acceleration and 90 agility as well as 89 throwing power. On defense, Chandler Jones leads Arizona with a 90 overall rating, including 92 power move and an 86 tackle rating while Patrick Peterson is at 92 overall with 92 speed, 92 acceleration, 95 agility and 89 man coverage at cornerback.

I get Cleveland being favored with the much better rated players on their team. However, we’ve seen the Browns put up duds here and there and while they’ve been winning the sim games, the ones we see are close like we saw against Tennessee. Arizona has been losing the sim games on their slate, but during the five game losing skid, each of Arizona’s losses have come by eight points or less. I think Arizona can compete here as well so I’ll take a stab at the Cardinals and the points here.