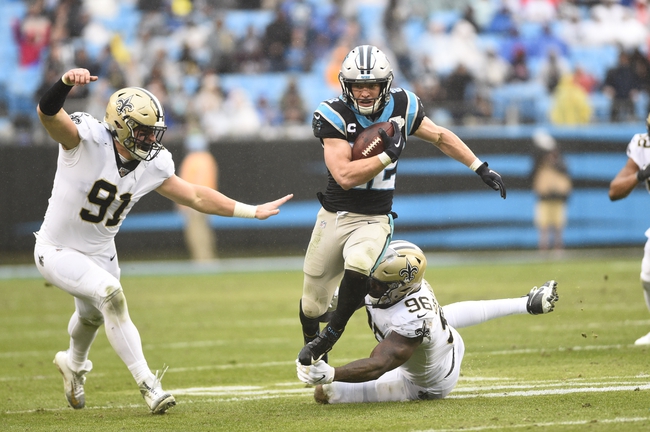 The San Francisco 49ers and the Carolina Panthers meet in a Madden 20 NFL simulation game on Tuesday night.

The San Francisco 49ers will look to add to their current three-game sim winning streak after a 45-22 win over New England last time out. George Kittle leads San Fran’s offense as a 97 overall rated tight end with 98 catching while Emmanuel Sanders comes in as the top wide receiver for the 49ers at 89 overall with 94 catching, 92 acceleration and 93 agility. Jimmy Garoppolo is starting QB for the Niners at 84 overall while Tevin Coleman is right behind at running back at 82 overall with 93 speed, 92 acceleration and 93 agility. On the San Francisco defense, Richard Sherman leads the way at 94 overall at cornerback, with 99 awareness as well as 98 jumping, 90 man coverage and 99 zone coverage. Nick Bosa leads the 49ers’ pass rush at 89 overall with 91 finesse move and 91 acceleration. The San Francisco defense also has four additional defenders with at least an 85 overall rating, including Arik Armstead, DeForest Buckner, Dee Ford and Fred Warner.

The Carolina Panthers will try to bounce back from a 51-49 loss to Buffalo last time out. Carolina is in arguably the most enviable spot in this year’s Madden as the only team with two of the game’s five players with a 99 overall rating, and they have one on each side of the ball. Christian McCaffrey leads the Carolina offense with 92 speed, 93 acceleration and 97 agility as well as 98 carrying and 96 juke. Greg Olsen is 88 overall at tight end with 93 catching and 93 catching in traffic while D.J. Moore comes in at 85 overall with 93 speed and acceleration and 81 catching at wide receiver. Cam Newton may be healthy in the game, but his overall rating is still down to 79 yet he still remains the starting quarterback for Carolina. On defense, Luke Kuechly holds onto the other 99 rating at linebacker, with 90 jumping, 91 impact blocking and 99 tackling as well as 99 play recognition and 96 pursuit. After Kuechly, Gerald McCoy and Kawann Short anchor the defensive line at 85 and 84 overall, with both possessing strength and impact blocking ratings in the low-90s.

I liked what I saw from Carolina early on and the Panthers have 40% of the game’s 99 overall rated players like I mentioned before, but the Panthers have still had their blips here and there. San Francisco has been playing as good in these sim games as they’ve been in reality, and the 49ers have pretty much been mowing down whatever is put in front of them as we saw against New England last time out. I just don’t like this spot for the Panthers, so I’ll lay the points with San Francisco here.