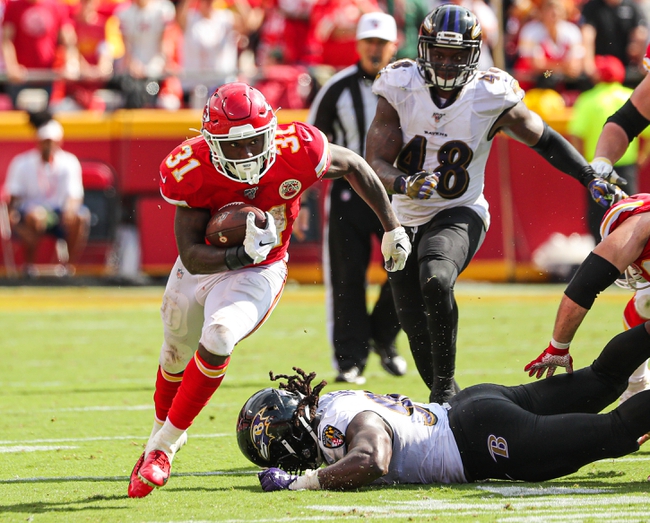 The Kansas City Chiefs and the Baltimore Ravens meet in an AFC heavyweight tilt in a Madden 20 NFL simulation game on Wednesday night.

The Kansas City Chiefs will look to build on a 47-16 beatdown victory over New England last time out. Patrick Mahomes comes into this one as one of the game’s five highly-regarded 99 overall rated players, with 96 throwing power as well as 97 short pass accuracy, 95 medium pass accuracy and 93 deep pass accuracy. Tyreek Hill isn’t far off at 96 overall, with a 91 attribute rating in catching along with 97 juke, 99 speed, 99 acceleration and 98 agility. Travis Kelce is also at 96 overall as Kansas City’s top tight end with attributes of 99 awareness, 85 speed. 91 catching in traffic and 91 catching overall. On defense, Chris Jones and Tyrann Mathieu share the team-high on the Chiefs’ unit with Jones leading the pass rush at 92 overall with 91 strength, 90 tackling, 89 finesse move and 95 power move while Mathieu anchors KC’s secondary at 92 overall with a 90 man coverage rating as well as 89 in zone coverage while also being rated at 90 speed, and 92 in acceleration and 92 agility.

The Baltimore Ravens will look to build off of back-to-back sim victories over Buffalo and an 18-13 win over Atlanta last time out. Lamar Jackson leads Baltimore’s offense at QB with a 92 overall rating, with 92 throw power and 92 short pass accuracy to go along with 96 speed, 96 acceleration and 95 agility. Mark Ingram II comes in at 86 overall as Baltimore’s top running back with 88 speed, 91 acceleration and 89 carrying while Mark Andrews is not far off at tight end with an 85 overall rating. On the defense, Earl Thomas III leads Baltimore with a team-high 93 overall rating, including 92 jumping and 96 zone coverage at free safety and Michael Pierce is a solid 91 overall on the defensive line with 94 block shedding and 90 impact blocking while Marlon Humphrey and Marcus Peters put together a strong cornerback duo at 89 and 85 overall for Baltimore. Humphrey possesses a 90 man coverage rating as well as 92 speed and 93 acceleration while Peters has 87 man coverage, 91 speed and 91 acceleration.

This is going to be a great sim game as it would be a great matchup in reality I have a feeling. With that said, I just don’t know how much I trust the Ravens in this spot. We’ve seen the Ravens cut it close against Atlanta and Buffalo, two teams that side-by-side they should beat up on given the advantage in skill players and their ratings. Kansas City is as good in the game as we’ve seen in reality and I just think that the Chiefs get the job done in this pick ‘em.