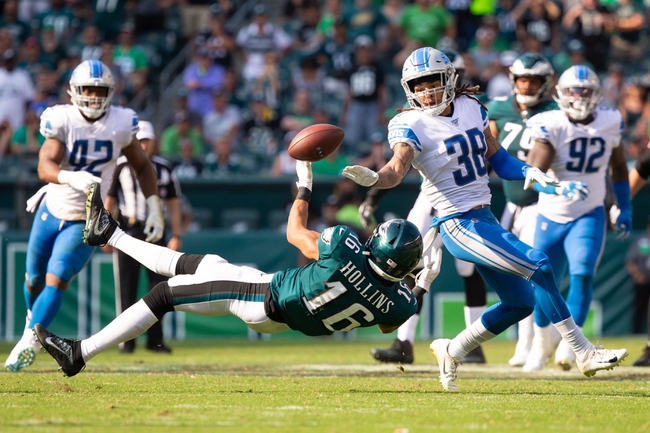 The Philadelphia Eagles and the Detroit Lions meet in a Madden 20 NFL simulation game on Wednesday afternoon.

The Philadelphia Eagles will look to build on a 29-19 win over the Los Angeles Chargers in their last game. Zach Ertz leads Philadelphia’s offense with a 90 overall rating with 87 acceleration and 93 catching while Alshon Jeffery and DeSean Jackson make up the Eagles’ top receiver pair at 85 and 84 overall respectively. Carson Wentz is starting at QB for Philadelphia at 83 overall while the Eagles’ top rated players are on the right side of their offensive line with Jason Kelce at center with a 94 overall rating, Brandon Brooks at 93 overall at right guard and right tackle Lane Johnson at 89 overall. On the defensive end, Fletcher Cox leads Philadelphia at 95 overall with 95 strength, 93 tackling and 96 power move while Brandon Graham is right defensive end at 87 overall with 90 power move and 93 impact blocking. Malcolm Jenkins leads the Eagles’ secondary at 86 overall with 91 acceleration, 90 agility and 88 zone coverage.

The Detroit Lions will look for a bounce back after a 33-16 loss to Pittsburgh last time out. Kenny Golladay and Marvin Jones Jr. are still the top receiver duo for the Lions with Golladay at 86 overall and Jones Jr. at 85 overall with both owning a 90 speed rating and a low-90s acceleration rating. Matthew Stafford remains the starting QB for Detroit with an 82 overall rating, including a 94 rated attribute in throwing power. Defensively, Damon Harrison Sr. leads Detroit with an 89 overall rating, including a 95 grade in impact blocking and 92 in tackling as well as a 91 mark in block shedding. Darius Slay Jr. may not be with the Lions either, but he still is on the team here and has high-80s ratings in man and zone coverage as well as low-90s ratings in speed, acceleration and agility.

These sim games are a coin flip like I’ve said before and they’re simulations, the variable here is just trying to figure out which simulation is the one that gets used to grade these games/wagers. With that said, the Eagles’ losses have come to teams on or above their level, and Philly’s usually done a good job against teams below them. Detroit’s been beat up on by the better teams and have scraped by the lower teams they’ve faced. I just think Philadelphia is skilled enough in terms of player ratings to win this one by a touchdown, so I’ll lay the points with the Eagles in this spot.