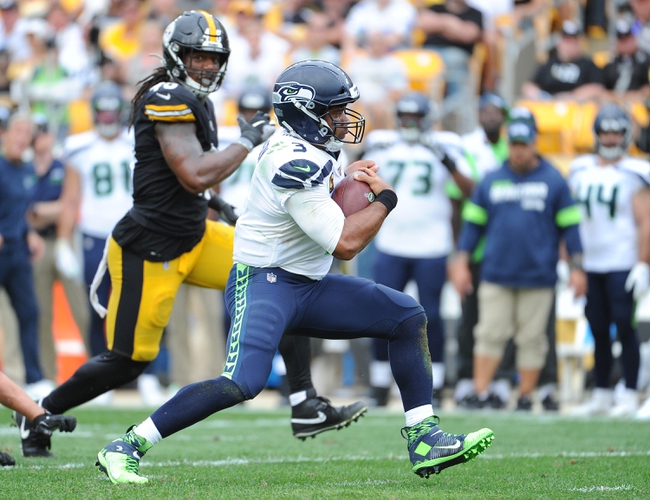 The Seattle Seahawks and the Pittsburgh Steelers meet in a Madden 20 NFL simulation game on Wednesday night.

The Seattle Seahawks will look to build off of a 26-17 win over Chicago in their last game. Russell Wilson leads the Seahawks offense with a solid 97 overall rating with 86 speed, 90 acceleration and 93 agility as well as 91 throwing power and 93 short pass accuracy, 94 medium pass accuracy and 96 deep pass accuracy. Tyler Lockett is Seattle’s top wide receiver with an 88 overall rating including 93 catching, 93 speed, 92 acceleration and 97 agility while Chris Carson also has an 86 rating in leading Seattle’s ground attack with 88 speed, 89 acceleration and 91 stiff arm. On the defensive side, Bobby Wagner is Seattle’s top defender with a 98 overall rating, with 96 tackling, 90 impact blocking, 98 power, as well as high-90s attribute ratings in pursuit and play recognition. Jadeveon Clowney is right behind on the defensive line at 88 overall with 95 pursuit, 91 play recognition, 87 speed and 90 acceleration.

The Pittsburgh Steelers will look to build on a 3rd straight sim victory after a 37-31 win over the Los Angeles Chargers last time out. JuJu Smith-Schuster leads Pittsburgh’s offense at wide receiver with an 86 overall rating, which includes a rating of 91 speed and 92 acceleration as well as 90 catching and 93 catching in traffic while James Conner starts at running back with an 81 overall rating with 86 speed, 89 acceleration and 89 carrying. Ben Roethlisberger is starting QB with an 81 overall rating with 89 throwing power and 89 short passing accuracy. On defense, Cameron Heyward leads Pittsburgh rated at 90 overall with 93 strength, 91 tackling and 92 power move while Stephon Tuitt is on the other side of the front at 87 overall with 90 block shedding and 91 strength.

This is a hard one to call as Seattle’s been one of the best sim teams since this whole thing started and they’re a team that’s been kind to me early on, but Pittsburgh’s had a nice run lately. The problem with Pittsburgh is that these simulation games don’t take momentum into consideration. Instead, I’m going to side with the over. Both teams may be solid defensively, but I can also see both sides getting near 30 points. Maybe a 33-30 or 31-28 type of game when the final whistle goes.