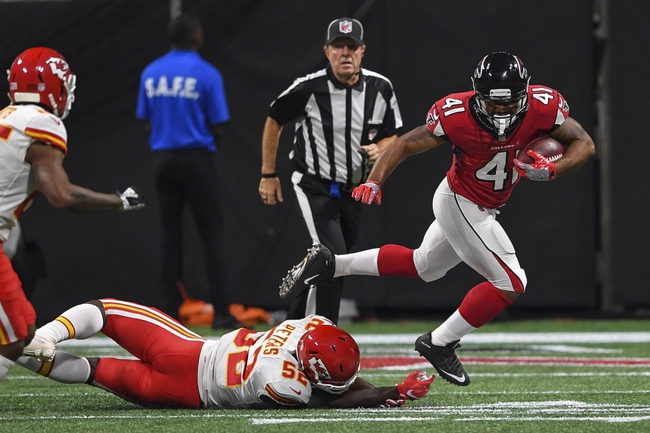 The Kansas City Chiefs and the Atlanta Falcons meet in a Madden 20 NFL simulation game on Friday night.

The Kansas City Chiefs will try to rebound from back-to-back sim losses after a 40-32 loss to New Orleans last time out. Patrick Mahomes comes into this one as one of the game’s five 99 overall rated players, with 96 throwing power as well as 97 short pass accuracy, 95 medium pass accuracy and 93 deep pass accuracy. Tyreek Hill isn’t far behind at 96 overall, with a 91 attribute rating in catching along with 97 juke, 99 speed, 99 acceleration and 98 agility while Travis Kelce is also at 96 overall as Kansas City’s top tight end with attributes of 99 awareness, 85 speed. 91 catching in traffic and 91 catching overall. On D, Chris Jones and Tyrann Mathieu share the team-high rank on the Chiefs’ unit with Jones leading the pass rush at 92 overall with 91 strength, 90 tackling, 89 finesse move and 95 power move while Mathieu anchors KC’s secondary at 92 overall with a 90 man coverage rating as well as 89 in zone coverage while also being rated at 90 speed, and 92 in acceleration and 92 agility.

The Atlanta Falcons will try to rebound from back-to-back sim losses after an 18-13 loss to Baltimore in their last game. Julio Jones leads Atlanta with a 97 overall rating, with 92 speed and 94 agility to go along with 96 catching, 95 catching in traffic and 98 spectacular catch. Austin Hooper’s rated 89 overall at tight end with 97 catching while Matt Ryan comes in at 87 overall at starting quarterback and Devonta Freeman leads the Falcons’ rushing attack with an 85 overall rating with 92 speed and 94 agility. On D, Grady Jarrett leads Atlanta rated 90 overall with 89 strength, 90 block shedding and 93 power move while Deion Jones is the Falcons’ top linebacker at 86 overall with 89 pursuit, 90 speed and 91 acceleration. Keanu Neal and Desmond Trufant lead the Falcons’ secondary at 85 and 84 overall respectively with Trufant logging 92 speed, 93 acceleration and 96 agility.

The points with Atlanta are tempting considering the issue that Kansas City has had in their last couple of games, giving up 45 to Baltimore and 40 to New Orleans. As high rated as the Chiefs are, the defense has had issues in these sim games as we saw in the earlier sims where KC was giving up 30-40 points a game with regularity. I also don’t want to be the guy to fade KC when the Chiefs can go off at any time. Instead, I’m going to side with the over as I see this being a high scoring game as well and I wouldn’t be surprised for a 38-35 type of game.