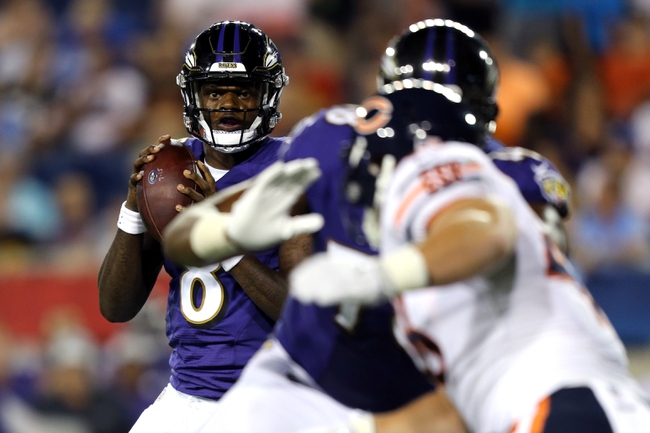 The Chicago Bears and the Baltimore Ravens meet in a Madden 20 NFL simulation game on Friday night.

The Chicago Bears will look to build on a 23-14 win over Cincinnati in their last game. Allen Robinson II leads the Bears on the offensive end with an 89 overall rating with 90 speed and 93 acceleration as well as 96 catching while Trey Burton is at 82 overall at tight end and Taylor Gabriel is at wide receiver with an 81 overall rating. Tarik Cohen leads the Bears’ backfield at 78 overall while Mitch Trubisky is still Chicago’s starting quarterback at 73 overall. On defense, Khalil Mack leads Chicago with a stacked 98 overall rating, with 87 speed and 89 acceleration along with 94 tackling, 90 impact blocking, 91 block shedding, 91 finesse move and 95 power move. Eddie Jackson is rated 89 overall at free safety with a 94 grade in zone coverage and 90 acceleration while Kyle Fuller has 92 speed and acceleration at cornerback with 91 zone coverage and Akiem Hicks is at 88 overall at left defensive end with 91 block shedding and 89 power move.

The Baltimore Ravens will try to build on three straight sim wins after a 45-28 win over Kansas City in their last sim appearance. Lamar Jackson leads the Ravens’ offense at QB with a 92 overall rating, with 92 throw power and 92 short pass accuracy to go along with 96 speed, 96 acceleration and 95 agility. Mark Ingram II comes in at 86 overall as Baltimore’s #1 running back with 88 speed, 91 acceleration and 89 carrying while Mark Andrews is not far off at tight end with an 85 overall rating. On defense, Earl Thomas III leads Baltimore with a team-high 93 overall rating, including 92 jumping and 96 zone coverage at free safety and Michael Pierce is a solid 91 overall on the defensive line with 94 block shedding and 90 impact blocking while Marlon Humphrey and Marcus Peters put together a strong cornerback duo at 89 and 85 overall for Baltimore. Humphrey possesses a 90 man coverage rating as well as 92 speed and 93 acceleration while Peters has 87 man coverage, 91 speed and 91 acceleration.

This is a battle between two solid defensive units. The difference for me though is that the Bears haven’t done squat against the better teams in the game and while the Ravens have had their own duds, they’re the better team here and the team that’s a bit easier to back here with Lamar Jackson at QB. Going from Cincinnati to Baltimore is a large step, even in a simulation game, so I’ll lay the points with Baltimore here.