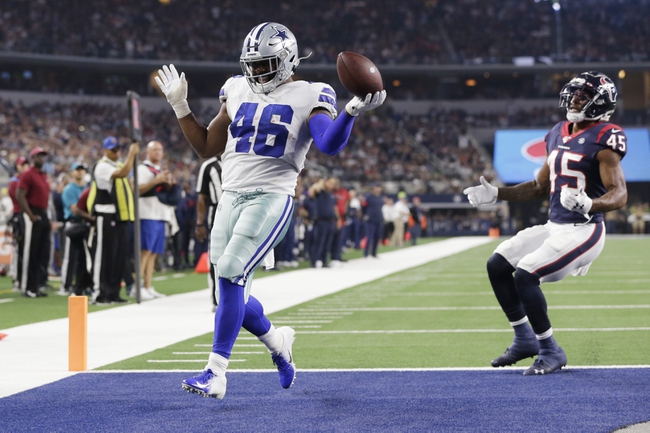 The Dallas Cowboys and the Houston Texans meet in a Lone Star Showdown in a Madden 20 NFL simulation game on Friday afternoon.

The Dallas Cowboys will look to build off of a 34-31 win over Buffalo in their last game. Ezekiel Elliott leads the Cowboys’ offense, rated 93 overall at running back with 90 speed, 91 acceleration and 95 agility while Amari Cooper leads Dallas’ receiving group at 91 overall with 92 speed, 96 agility and 89 catching. Dak Prescott has an 81 overall rating as starting quarterback with 87 throwing power and 88 short pass accuracy. The Cowboys also have some muscle on their offensive line, with Zack Martin owning a team-high 97 overall rating while Tyron Smith is at left tackle at 91 overall. On the defense, Byron Jones and Demarcus Lawrence lead the Cowboys, each at 88 overall apiece, with Lawrence owning a 93 finesse move rating, 89 power move and 88 block shedding rating while Jones has 92 speed, 94 acceleration and 96 agility to go along with an 84 man coverage rating and 90 zone coverage rating in the Cowboys’ secondary.

The Houston Texans will try to snap a four-game sim losing skid after a 37-24 loss to Minnesota in their last game. DeAndre Hopkins leads the Texans rated 98 overall with 98 catching as well as 99 marks in catching in traffic, spectacular catch, release and jumping with 92 speed, 93 acceleration and 92 agility. Deshaun Watson is rated at 86 overall at starting QB with 88 acceleration, 84 speed and 89 throw power while Lamar Miller is close behind at 84 overall ain the Houston backfield with 91 carrying, 89 juke, 92 speed, 91 agility and 91 acceleration. On defense, J.J. Watt leads at 97 overall with 97 strength, 94 impact blocking, 97 tackling, 93 finesse move and 94 power move. D.J. Reader and Justin Reid also come in at 84 overall for the Texans’ defense with Reader on the defensive front and Reid in the secondary.

This is a hard one to call as I got burned with Dallas against Buffalo, but Houston’s been struggling in these sim games. The good news for Houston is that momentum isn’t a factor in these sim games. Even still, I’m going to side with the over rather than trying to pick a side. Dallas seems a lot like they’re good for 30+ points more often than not and I think Houston can do their part on the scoreboard as well for this one so I’ll take the over in a game I could see hitting 60 points.