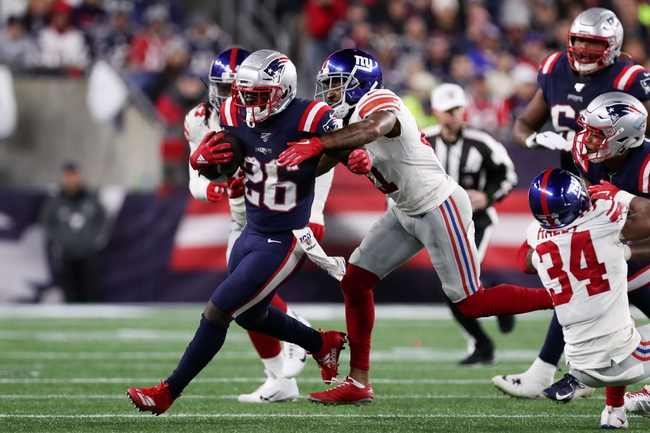 The New England Patriots and the New York Giants meet in a Madden 20 NFL simulation game on Friday afternoon.

The New England Patriots will try to rebound from back-to-back sim losses after a 37-30 loss to New Orleans in their last game. Tom Brady leads the Patriots at quarterback with a 91 overall rating with 90 throw power and 96 short pass accuracy while Julian Edelman is his top target in the Patriot offense at 87 overall with 91 acceleration, 91 agility and 85 catching. James White leads the New England ground attack at 83 overall with 89 speed, 92 acceleration and 90 agility. On defense, Stephon Gilmore leads New England with a 98 overall rating with 99 awareness and 92 speed with 94 acceleration and 94 agility while also rated at 98 in man coverage and 96 in zone coverage. Devin McCourty is New England’s second-highest rated defensive back at 92 overall with 93 zone coverage and 90 marks across the board in speed, agility and acceleration. Dont’a Hightower leads New England’s linebacking corps at 88 overall with 91 impact blocking and 92 tackling in addition to 93 play recognition and 93 pursuit.

The New York Giants will look to build off of a 48-11 win over the Buffalo Bills last time out. Saquon Barkley leads the G-Men on offense with an 89 overall rating, with 92 speed, 93 acceleration, 96 agility, 94 carrying and 94 juke ratings. Evan Engram leads New York’s receiving group at tight end at 88 overall with 88 catching, 90 speed and 91 acceleration. Golden Tate III and Sterling Shepard make up a good tandem at wide receiver with each logging 90 speed and 91 acceleration with Tate III having 89 catching compared to Shepard’s 88. On defense, Leonard Williams is the only player rated 80+ overall on that side of the ball for the Giants.

I’ve said often that these games are coin flips and anything can happen. And if there’s any matchup where we know anything can happen, it’s the Giants and the Patriots. However, while I’ve ragged on New England for an inconsistent defense in these sim games compared to what we saw in reality, and while the Giants are coming off of a beatdown of the Bills, the fact remains that the Giants have been one of the worst sim teams since these started, going 2-9. New England’s losses are coming against the better teams and the Patriots have beaten up on the lower rated teams. I expect to see that continue here, so I’ll lay the points with New England in this spot.