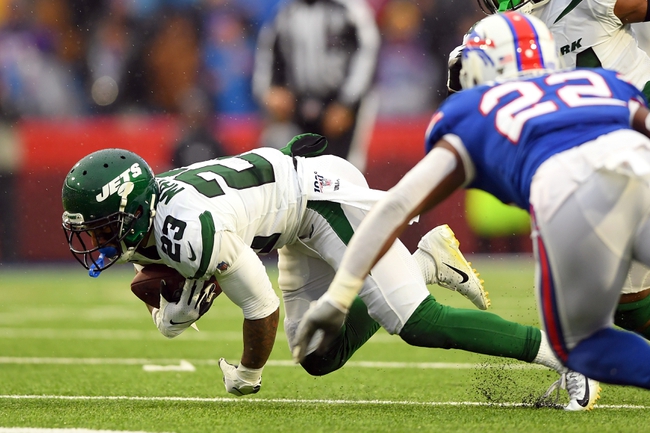 The New York Jets and the Buffalo Bills meet in a Madden 20 NFL Sim Classic matchup on Saturday afternoon.

The New York Jets come into this game with a sim record of 5-4 after a 25-20 loss to the Minnesota Vikings in their last game. Le’Veon Bell leads New York’s offense at 88 overall, including 89 speed, 92 acceleration and 95 agility as well as 88 carrying and 91 juke. Robby Anderson leads the Jets’ receiving group at 84 overall with 91 catching while Sam Darnold is rated 74 overall as New York’s starting quarterback. On the D, Jamal Adams leads the Jets with a 92 overall rating, with 95 power and 92 zone coverage as well as 91 speed and 90 acceleration. The Jets also possess a pair of 85 overall rated middle linebackers in C.J. Mosley and Avery Williamson, with both possessing 89 acceleration and Mosley having 91 tackling while Williamson has 86 block shedding.

The Buffalo Bills come into this game with a 3-11 sim record after a 34-31 loss to Dallas in their last simulation appearance. Cole Beasley and John Brown lead Buffalo’s offense at the two wide receiver spots, coming in at 83 overall, with Brown being the speedier of the two in-game with 92 speed and 90 acceleration while Beasley is the more agile receiver with 92 agility. Frank Gore and Devin Singletary are the duo at RB for the Bills at 80 overall, while Josh Allen is at 77 overall as the Bills’ starting QB. On defense, the defensive backs Buffalo’s greatest asset with Micah Hyde and Tre’Davious White both at 88 overall, with White possessing 91 speed and 93 acceleration at cornerback while Hyde has a 91 zone coverage rating at free safety. Jordan Poyer is 85 overall at strong safety and Lorenzo Alexander is a decent 83 overall at one of the outside linebacker positions.

In the sim classic, each team plays a division opponent once so it’s sometimes easier to get an idea on a potential pick if the teams have played already. With that said, the first sim meeting between the two was a 32-31 win for the Jets over a month ago. I get the Bills being favored, but anyone who’s read any of my sim picks, knows that I’m not high on the Bills at all as their play from the real regular season hasn’t applied in the game and the Bills just haven’t been a good team. Aside from a couple of beatdown losses to New England and Dallas, the Jets have hung in in their losses and won some pretty decent games and I think there’s value to be had with the free touchdown here. Give me the Jets and the points.