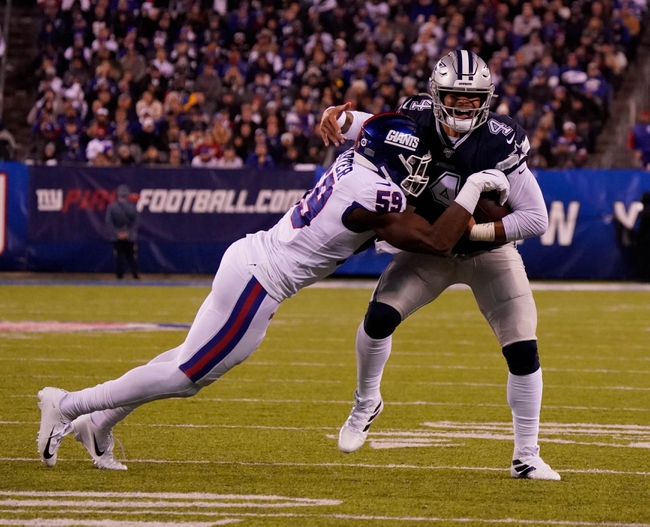 The New York Giants come into this game with a sim record of 2-10 after a 38-27 loss to New England in their last game. Saquon Barkley leads the Giants on offense with an 89 overall rating, with 92 speed, 93 acceleration, 96 agility, 94 carrying and 94 juke ratings. Evan Engram leads New York’s receiving group at tight end at 88 overall with 88 catching, 90 speed and 91 acceleration. Golden Tate III and Sterling Shepard make up a good tandem at wide receiver with each logging 90 speed and 91 acceleration with Tate III having 89 catching compared to Shepard’s 88. On defense, Leonard Williams is the only player rated 80+ overall on the Giants on that end of the ball.

The Dallas Cowboys will look to build on a five-game sim winning streak and an 11-4 sim record after a 29-11 win over Houston in their last game. Zeke Elliott leads the Dallas offense, rated 93 overall at running back with 90 speed, 91 acceleration and 95 agility while Amari Cooper leads the Cowboys’ receiving group at 91 overall with 92 speed, 96 agility and 89 catching. Dak Prescott has an 81 overall rating as starting QB with 87 throwing power and 88 short pass accuracy. The Cowboys also have some size on their offensive line, with Zack Martin owning a team-high 97 overall rating while Tyron Smith is at left tackle at 91 overall. On the D, Byron Jones and Demarcus Lawrence lead the Cowboys, each at 88 overall apiece, with Lawrence owning a 93 finesse move rating, 89 power move and 88 block shedding rating while Jones has 92 speed, 94 acceleration and 96 agility to go along with an 84 man coverage rating and 90 zone coverage rating in the Cowboys’ secondary.

These sim classic games see each division opponent play once and the top two advance to a knockout bracket. With that said, I don’t see anything for the Giants except the bottom of the division standings. The Giants have been one of, if not the worst sim team since we started covering these sim games. New York’s been blown out left and right, and that includes a 51-10 loss to the Cowboys in an earlier sim. I just think the Cowboys are far and away the better team and wouldn’t be surprised with a similar result here, even in a simulated game. I’ll lay the points with the Cowboys here.