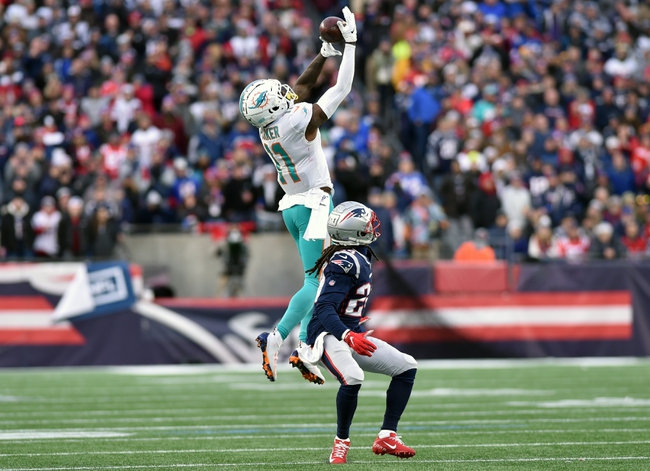 The Miami Dolphins and the New England Patriots meet in a group stage game as part of the Madden 20 Sim Classic on Saturday morning.

The Miami Dolphins come into this game with a sim record of 3-4 after a 4th straight sim defeat in the form of a 38-34 loss to Tampa Bay in their last game. Devante Parker Miami with an 84 overall rating, including 91 speed and 91 acceleration while Albert Wilson is at 76 overall at another wide receiver spot with 91 speed and acceleration as well. Ryan is at starting QB for Miami, but only at a 74 overall rating. On the defensive end, three of Miami’s four 80+ rated overall players are all in the secondary, with Xavien Howard and Aqib Talib at 82 and 81 overall with Howard owning 92 speed and 92 acceleration while Talib has 91 acceleration and 91 agility. Reshad Jones is also at 82 overall at strong safety with 86 speed and 89 acceleration.

The New England Patriots come into this game with a sim record of 10-8 after a 38-27 win over the New York Giants on Friday. Tom Brady leads the Pats at QB with a 91 overall rating with 90 throw power and 96 short pass accuracy while Julian Edelman is his top target in the Patriot’s receiving corps at 87 overall with 91 acceleration, 91 agility and 85 catching. James White leads the Patriots’ ground attack at 83 overall with 89 speed, 92 acceleration and 90 agility. On defense, Stephon Gilmore leads New England with a 98 overall rating with 99 awareness and 92 speed with 94 acceleration and 94 agility while also rated at 98 in man coverage and 96 in zone coverage. Devin McCourty is New England’s second-highest rated defensive back at 92 overall with 93 zone coverage and 90 marks across the board in speed, agility and acceleration. Dont’a Hightower leads New England’s linebacking corps at 88 overall with 91 impact blocking and 92 tackling in addition to 93 play recognition and 93 pursuit.

This sim classic has an interesting format, where each team plays each division opponent once, then the top two advance. And from enough of a sample size, if Miami were getting points against Buffalo or the Jets, I’d be apt to taking a stab at the points as the Dolphins won 3 of 4 simulations against the Bills and Jets. However, these two never played each other so it’s hard to gauge. With that said, New England does a good job beating the teams they should in these sim games, but we’ve also seen the defense fail to carry over from time-to-time. The problem is that the only above average team that Miami played saw the Dolphins lost 48-10 to Baltimore. I just think this is a game that we see New England’s high ratings come into play and the Pats pull away as the game goes on so I’ll lay the points with New England here.