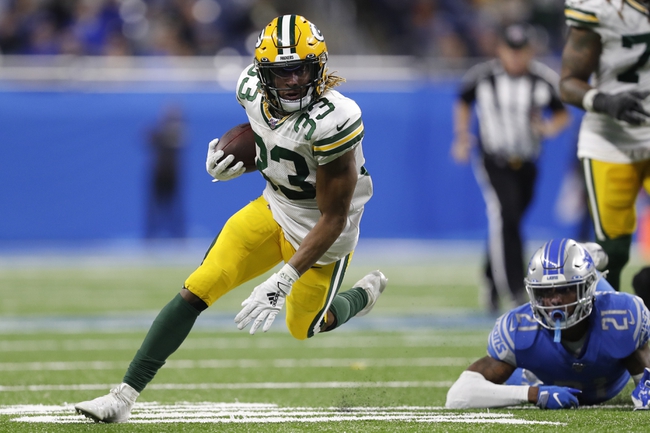 The Detroit Lions and the Green Bay Packers meet in a Madden 20 NFL Sim Classic matchup on Sunday afternoon.

The Detroit Lions come into this game with a sim record of 2-6 after a 32-31 loss to Philadelphia in their last game. Kenny Golladay and Marvin Jones Jr. are still the top receiving duo for the Lions with Golladay at 86 overall and Jones Jr. at 85 overall with both possessing a 90 speed rating and a low-90s acceleration rating. Matthew Stafford remains the starting QB for Detroit with an 82 overall rating, including a 94 rated attribute in throwing power. On defense, Damon Harrison Sr. leads the Lions with an 89 overall rating, including a 95 grade in impact blocking and 92 in tackling as well as a 91 mark in block shedding. Darius Slay Jr. may not be with the Lions either, but he still is on the team here and has high-80s ratings in man and zone coverage as well as low-90s ratings in speed, acceleration and agility.

The Green Bay Packers come into this game with a sim record of 10-4 after picking up a 37-16 win over Tennessee in their last game. Davante Adams leads the Pack on the offensive end at 94 overall, with 94 catching and 94 catching in traffic while also possessing 89 speed and 92 acceleration. Aaron Rodgers is the starting QB with an 89 overall rating, with 94 throwing power, 90 short pass accuracy and ratings in the high-80s in medium and deep pass accuracy while Aaron Jones leads Green Bay’s ground attack with an 87 overall attribute rating with 93 carrying, 92 juke, 91 speed and 93 acceleration. On defense, Kenny Clark leads Green Bay’s pass rush at 90 overall with 95 strength with 92 block shedding and 89 power moves while Jaire Alexander is not far off at 89 overall to lead the Green Bay secondary at cornerback, with 92 man coverage in addition to 93 ratings in speed and acceleration with 94 agility. Za’Darius Smith and Adrian Amos come in at 88 and 87 overall respectively as well as a pair of key pieces in a stacked Packer defense.

The group stage of the Sim Classic means every team plays every division opponent once, and it helps that we usually have at least one simulation to go off since these sim games started. With that said, while Detroit’s stepped it up lately with a couple of wins and a close loss to Philly, the Packers are just the better team here and already beat the Lions 38-17 in a previous sim matchup. I just think we’re probably going to see a couple of beatdowns early on and this should be one of them. I’ll lay the points with Green Bay here.