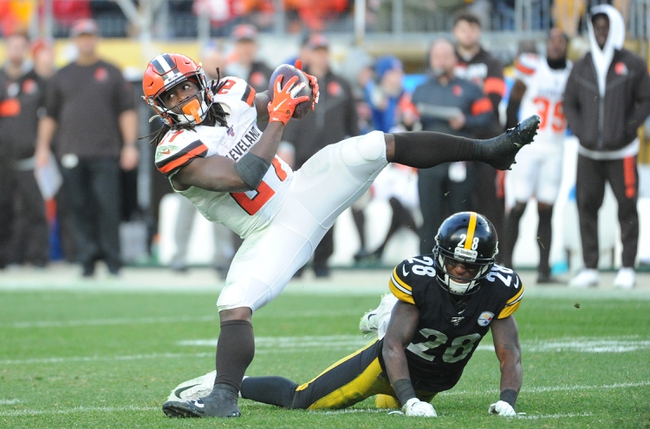 The Cleveland Browns and the Pittsburgh Steelers meet in a Madden 20 NFL Sim Classic matchup on Sunday morning.

The Cleveland Browns come into the game with a sim record of 6-4 following a 32-18 win over the Buffalo Bills in their last appearance. Nick Chubb leads the Browns on offense with a 92 overall attribute rating, with 92 speed, 91 acceleration and 85 strength grades. Odell Beckham Jr. is the top receiver for Cleveland, rated at 90 overall with a 99 rated spectacular catch as well as 91 in catching in traffic and a 98 mark in ball carrier vision while also having 94 ratings in speed and acceleration and 98 agility. Kareem Hunt is rated at 88 overall at running back, with 90 speed and 92 acceleration and 92 agility along with a 98 carrying rating while Baker Mayfield is graded at 76 overall starting at QB, including 93 throwing power, 87 short pass accuracy and 85 long ball accuracy. On the defensive end for the Browns, Myles Garrett is the leader with a team-high 93 overall rating at defensive end, with 85 speed, 90 acceleration and 96 strength as well as a 95 power move rating.

The Pittsburgh Steelers come into this one with a sim record of 10-6 after a 45-21 loss to Seattle in their last game. JuJu Smith-Schuster leads the Steelers’ offense at wide receiver with an 86 overall rating, which includes a rating of 91 speed and 92 acceleration as well as 90 catching and 93 catching in traffic while James Conner is the top running back with an 81 overall rating with 86 speed, 89 acceleration and 89 carrying. Ben Roethlisberger is starting QB with an 81 overall rating with 89 throwing power and 89 short passing accuracy. On D, Cameron Heyward leads Pittsburgh rated at 90 overall with 93 strength, 91 tackling and 92 power move while Stephon Tuitt is on the other side of the front at 87 overall with 90 block shedding and 91 strength.

In the sim classic, each team play a division opponent one time, and more often than not we’ve already seen the matchup earlier on in these sim games so we have something to go off of. With that said, Cleveland looks like a team that the game loves as a team that went just 6-10 in reality, they matched that win total in just 10 sim matchups. However, one of those losses was to Pittsburgh in a 49-14 Steeler victory and Pittsburgh’s been more consistent with putting points on the board since these sim games have started, scoring 30+ points in 8 of their 16 sim games. I’ll lay the points with Pittsburgh here.