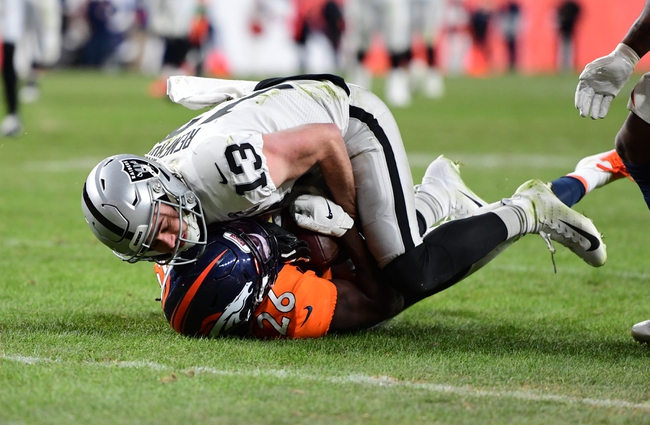 The Las Vegas/Oakland Raiders and the Denver Broncos meet in a Madden 20 NFL Sim Classic game on Monday night.

The Las Vegas/Oakland Raiders come into this one with a 3-6 sim record after a 23-3 loss to Arizona in their last game. The Raiders have some muscle on the offensive line with Rodney Hudson at 93 overall, Richie Incognito at 87 overall and Trent Brown at 86 overall. Josh Jacobs and Darren Waller each have 85 overall attribute ratings, with Jacobs owning 96 carrying and 91 acceleration at running back while Waller has 89 speed, 89 acceleration and 96 catching at tight end. Tyrell Williams is the Raiders’ top wide receiver at 82 overall with 92 speed, 93 acceleration and 95 agility while Derek Carr is still the Raiders’ starting quarterback with an 80 overall rating. On the defensive end, Lamarcus Joyner comes in with an 83 overall rating, including 88 speed and 92 acceleration, but after Joyner, every defender on the Raiders owns a 79 overall rating or lower.

The Denver Broncos come into this one with a sim record of 4-6 following a 45-34 loss to New Orleans in their last game. Phillip Lindsay leads the Broncos offensively with an 85 overall rating at running back with 93 carrying as well as 93 speed and 91 acceleration. Courtland Sutton is right behind as the Broncos’ top wide receiver with 89 speed, 92 acceleration and 92 catching as part of his 84 overall rating. On defense, Von Miller leads the Broncos with a team-high 96 overall rating, including 93 tackling, 89 impact blocking, 90 finesse move and 93 power move. Chris Harris Jr. is at DB at 90 overall with a 91 man coverage rating and 90 speed. Justin Simmons and Kareem Jackson make up a strong combination in the Denver secondary at 89 and 87 overall.

These sim classic games are interesting as the first round forces each team to play all three division opponents, so for the sake of a pick, we normally have a sample to go off of. The lone meeting between the two since we started covering these sim games saw the Broncos win 36-24, and I find myself leaning Broncos as it was. However, both teams have been shoddy defensively, and I can’t tell you how many sims I’ve seen where either side is giving up 30-40 points regularly. Instead, I’m going to side with the over as I could easily see this game hitting 60-65 points.