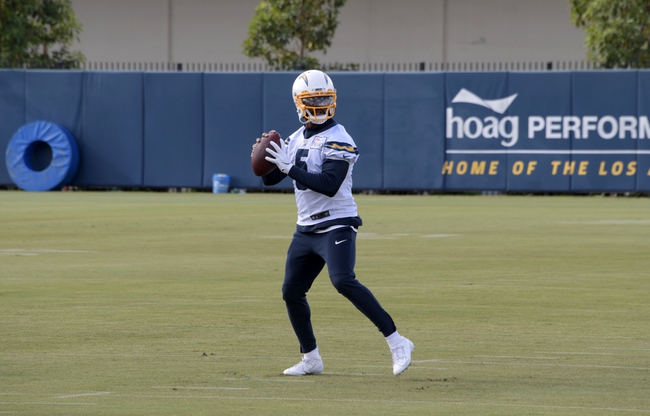 Who Will Be The Los Angeles Chargers Starting Quarterback?

For the first time since 2005, the Los Angeles Chargers will have a starting quarterback not named Phillip Rivers. The franchise leader in completions, pass attempts, passing yards and passing touchdowns is now suiting up for the Indianapolis Colts. While there’s a decent idea of who will be the starter this season, there are betting odds available for this situation and there could be some value outside of the obvious.

Here is handicapping the Chargers quarterback situation with the latest odds.

Tyrod Taylor, -370 - Tyrod Taylor is the clear favorite on the depth chart, as he has a track record and experience on his side with 70 career games and 46 starts under his belt. Taylor has played for four different franchises, and he’s racked up a 23-21-1 record with a 61.6 percent completion percentage, 9,562 passing yards, 54 touchdowns and 20 interceptions. Taylor also has 1,843 career rushing yards and 16 rushing touchdowns. Taylor has shown flashes throughout his career and has above-average athleticism that’s intriguing for the QB position, but he’s had issues with consistency, has never been the most accurate passer and simply hasn’t led his team to victories when starting. With Taylor turning 31 years old by the time the season begins, it’s fair to say he’s a veteran bridge quarterback who will run hot and cold.

Justin Herbert, +260 - Justin Herbert was the sixth round pick in the 2020 NFL Draft and is the likely future of the quarterback position for the Chargers. In four seasons at Oregon, Herbert completed 64 percent of his passes for 10,541 yards, 95 touchdowns and 23 interceptions. Herbert also rushed for 560 yards and 13 scores. Herbert underachieved at times at Oregon, but when he was on, he was one of the top quarterbacks in the country and a true difference maker. Herbert is a solid athlete, has great size and does a good job of fooling the defense with his eyes. Herbert can improve his touch and there are questions about his leadership. There’s also concerns about Herbert being a rookie and not being able to operate under a normal schedule due to the Coronavirus. Herbert will enter camp behind the eight ball.

Easton Stick, +3200 - Easton Stick was a fifth round pick in the 2019 NFL Draft and didn’t throw a single pass last season. Stick is a big quarterback with a high football IQ and simply knows how to win games. Stick was a four-time FCS champion at North Dakota State and was the MVFC Offensive Player of the Year in 2018. Stick produced a 49-3 record with the Bison, making him the winningest quarterback in NCAA Division I FCS history. Stick appears to be one of those quarterbacks who can carve out a long career as a backup simply due to his leadership and winning mentality, but the selection of Herbert shows that the Chargers aren’t comfortable with him actually seeing the field.

Pick: This is really a pick between Taylor and Herbert, and the veteran should be the clear favorite given that he’s been there done that and does bring some flashiness to the position. The lack of rookie camps and being around teammates makes Herbert even less of an option early knowing that he’s limited on working with his new teammates and learning the NFL life. Taylor is the safer option and gives the Chargers the best chance to win right away.

With all that said, Taylor is an average quarterback no matter how you slice it and it’s not impossible to surpass that in preseason. It would shock nobody if Herbert shined in exhibition play and forced the coaching staff to make a tough decision. Herbert has far and away more upside and he has these stretches where he plays with a chip on his shoulder and plays brilliant football.

I’ll take a shot with Herbert and the big payout on this prop.