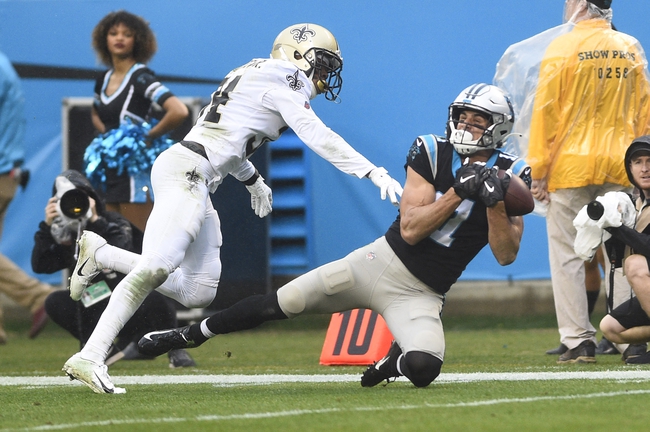 The Carolina Panthers and the New Orleans Saints meet in a Madden 20 NFL Sim Classic matchup on Tuesday afternoon.

The Carolina Panthers come into this one with a sim record of 5-3 after a 46-27 win over the San Francisco 49ers in their last sim game. Carolina is in one of the most enviable spots in this year’s game as the only team with two of the game’s five players with a 99 overall rating, and they have one on each side of the ball. Christian McCaffrey leads the Panthers’ offense with 92 speed, 93 acceleration and 97 agility as well as 98 carrying and 96 juke. Greg Olsen is 88 overall at tight end with 93 catching and 93 catching in traffic while D.J. Moore comes in at 85 overall with 93 speed and acceleration and 81 catching at wide receiver. Cam Newton may finally be healthy in the game, but his overall rating is still down to 79 yet he still remains the starting QB for the Panthers. On defense, Luke Kuechly holds onto the other 99 rating at linebacker, with 90 jumping, 91 impact blocking and 99 tackling as well as 99 play recognition and 96 pursuit. After Kuechly, Gerald McCoy and Kawann Short anchor the defensive line at 85 and 84 overall, with both possessing strength and impact blocking ratings in the low-90s.

The New Orleans Saints come into this game with a 7-6 sim record after a 40-32 win over the Kansas City Chiefs in their last sim game. Michael Thomas is another one of the game’s five 99 overall rated players, with 89 speed, 92 acceleration and 92 agility as well as 99 catching, 98 catching in traffic and 97 spectacular catch with 96 release and 93 jumping. Drew Brees is the starting QB for the Saints at 94 overall with 99 short pass accuracy, 97 medium pass accuracy and 91 deep ball accuracy. Alvin Kamara leads the Saints at running back with an 89 overall rating, including 94 acceleration, 93 agility, 90 carrying and 90 juke while Jared Cook is at 87 overall with 90 acceleration and 85 catching. On D, Cameron Jordan leads the Saints’ pass rush at 92 overall with 92 impact blocking, 89 tackling and 94 finesse move. Demario Davis is at 89 overall at outside linebacker with 90 play recognition and 90 pursuit as well as 86 speed and 89 acceleration. Marcus Williams and Marshon Lattimore also make up a big chunk of the New Orleans secondary at 86 and 85 overall.

I get the Saints being favored here, but I’m not sure I see it by this many points. The lone head-to-head sim between the two teams since we started covering the sim matchups saw the Panthers win 44-31. I know a lot of these sim games are coin flips and I’ve said it’s all about banking on which sim you think is going to come out. I just think there’s enough of a sample size overall and enough in a head-to-head game to suggest that the Panthers are capable of keeping this one close if not pulling off another upset so I’ll take Carolina and the points as well as putting a bit on Carolina ML.