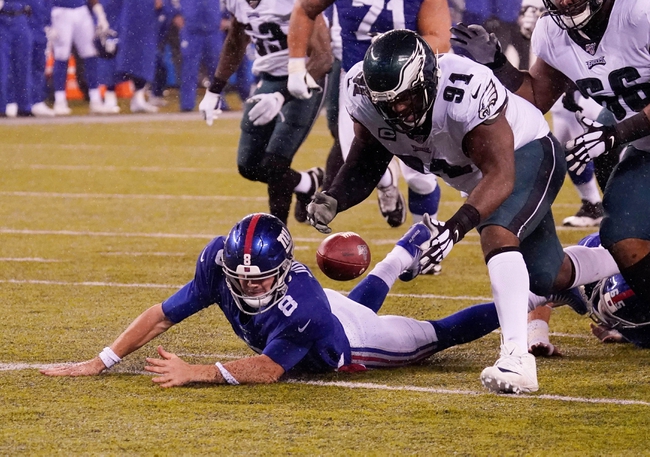 The New York Giants and the Philadelphia Eagles meet in a Madden 20 NFL Sim Classic matchup on Tuesday night.

The New York Giants come into this one with a Sim Classic record of 0-1, losing their opening group stage game to Dallas by a final score of 47-27. Saquon Barkley leads New York on offense with an 89 overall rating, with 92 speed, 93 acceleration, 96 agility, 94 carrying and 94 juke ratings. Evan Engram leads the G-Men’s receiving group at tight end at 88 overall with 88 catching, 90 speed and 91 acceleration while Golden Tate III and Sterling Shepard make up a good tandem at wide receiver with each logging 90 speed and 91 acceleration with Tate III having 89 catching compared to Shepard’s 88. On the defense, Leonard Williams is the only player rated 80+ overall on the Giants on that end of the ball.

The Philadelphia Eagles enter their second group stage game with a 1-0 record after a 34-13 win over the Washington Redskins to kick things off. Zach Ertz leads the Eagles’ offense with a 90 overall rating with 87 acceleration and 93 catching while Alshon Jeffery and DeSean Jackson make up the Philly’s top receiving pair at 85 and 84 overall respectively. Carson Wentz is starting at quarterback for Philly at 83 overall while the Eagles’ top rated players are on the right side of their offensive line with Jason Kelce at center with a 94 overall rating, Brandon Brooks at 93 overall at right guard and right tackle Lane Johnson at 89 overall. On the defense, Fletcher Cox leads the Eagles at 95 overall with 95 strength, 93 tackling and 96 power move while Brandon Graham is right defensive end at 87 overall with 90 power move and 93 impact blocking. Malcolm Jenkins leads the Eagles’ secondary at 86 overall with 91 acceleration, 90 agility and 88 zone coverage.

Part of me considered the Giants and the points given how Ned York hung 27 on the Cowboys, but the fact is that the Giants were blown out yet again, and that’s been the theme for the Giants during these sim games. Philadelphia beat the Redskins by 3 TDs, and I think the Redskins are a slightly better team than what New York has outside of Barkley and Engram, so I’ll lay the points in what should be another beatdown as Philly punches their ticket to the next round.