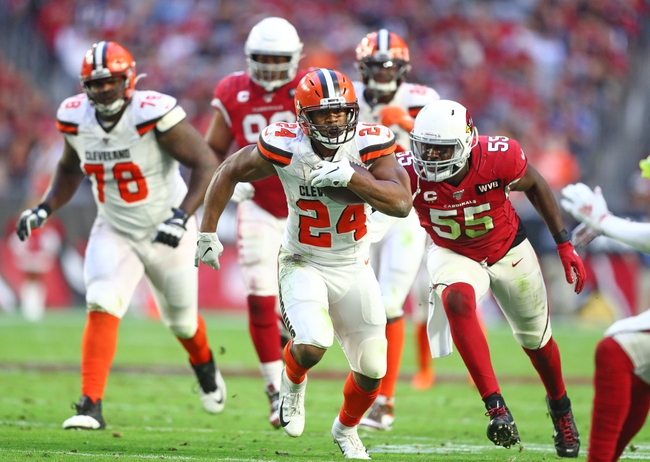 The Cleveland Browns and the Baltimore Ravens meet in a Madden 20 NFL Sim Classic matchup on Wednesday night.

The Cleveland Browns will look to rebound after starting their Sim Classic with a 37-34 loss to the Pittsburgh Steelers in their first game. Nick Chubb leads Cleveland on offense with a 92 overall rating, with 92 speed, 91 acceleration and 85 strength grades. Odell Beckham Jr. is the top receiver for Cleveland, rated at 90 overall with a 99 rated spectacular catch as well as 91 in catching in traffic and a 98 mark in ball carrier vision while also having 94 ratings in speed and acceleration and 98 agility. Kareem Hunt is rated 88 overall at running back, with 90 speed and 92 acceleration and 92 agility along with a 98 carrying rating while Baker Mayfield is rated at 76 overall starting at quarterback, including 93 throwing power, 87 short pass accuracy and 85 long ball accuracy. On the defensive end for the Browns, Myles Garrett is the leader with a team-high 93 overall rating at defensive end, with 85 speed, 90 acceleration and 96 strength as well as a 95 power move rating.

The Baltimore Ravens will look to start the Sim Classic 2-0 after opening things up with a 37-19 win over Cincinnati in game one. Lamar Jackson leads the Ravens’ offense at quarterback with a 92 overall rating, with 92 throw power and 92 short pass accuracy to go along with 96 speed, 96 acceleration and 95 agility. Mark Ingram II comes in at 86 overall as Baltimore’s top RB with 88 speed, 91 acceleration and 89 carrying while Mark Andrews is not far behind at tight end with an 85 overall rating. On defense, Earl Thomas III leads Baltimore with a team-high 93 overall rating, including 92 jumping and 96 zone coverage at free safety and Michael Pierce is a solid 91 overall on the defensive line with 94 block shedding and 90 impact blocking while Marlon Humphrey and Marcus Peters put together a strong cornerback duo at 89 and 85 overall for Baltimore. Humphrey possesses a 90 man coverage rating as well as 92 speed and 93 acceleration while Peters has 87 man coverage, 91 speed and 91 acceleration.

It's always dangerous laying big points with the Ravens and giving up a lot to Cleveland as Baltimore’s offense can forget to show up occasionally in these sim games and you never know which Cleveland team is going to show up. However, Baltimore won the lone sim matchup 43-17, and I think that the Ravens’ defense will win the day here. I’ll lay the points with Baltimore here.