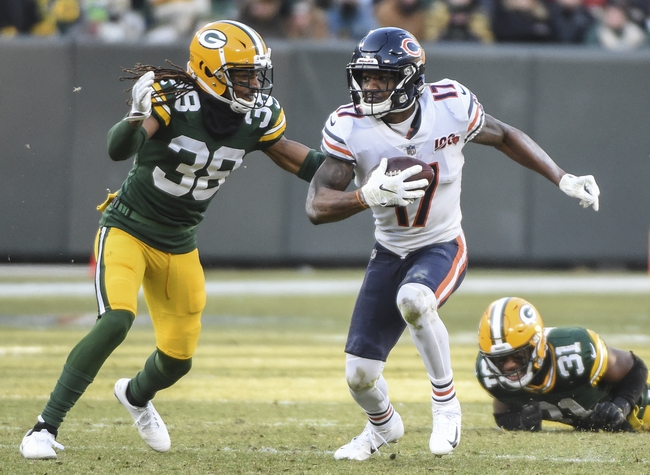 The Chicago Bears and the Green Bay Packers meet in a Madden 20 NFL Sim Classic matchup on Thursday afternoon.

The Chicago Bears come into this game looking to rebound after dropping their first sim classic game to Minnesota by a final count of 29-27. Allen Robinson II leads the Bears on the offensive end with an 89 overall rating with 90 speed and 93 acceleration as well as 96 catching while Trey Burton is at 82 overall at tight end and Taylor Gabriel is an 81 overall rated wide receiver. Tarik Cohen leads the Chicago backfield at 78 overall while Mitch Trubisky is still Chicago’s starting quarterback at 73 overall. On defense, Khalil Mack leads Chicago with a solid 98 overall rating, with 87 speed and 89 acceleration along with 94 tackling, 90 impact blocking, 91 block shedding, 91 finesse move and 95 power move. Eddie Jackson is rated 89 overall at free safety with a 94 grade in zone coverage and 90 acceleration while Kyle Fuller has 92 speed and acceleration at cornerback with 91 zone coverage and Akiem Hicks is at 88 overall at left defensive end with 91 block shedding and 89 power move.

The Green Bay Packers will look to build on their opening 37-34 win over Detroit last time out. Davante Adams leads Green Bay on the offensive end at 94 overall, with 94 catching and 94 catching in traffic while also possessing 89 speed and 92 acceleration. Aaron Rodgers is the starting pivot with an 89 overall rating, with 94 throwing power, 90 short pass accuracy and ratings in the high-80s in medium and deep pass accuracy while Aaron Jones leads Green Bay’s rushing attack with an 87 overall attribute rating with 93 carrying, 92 juke, 91 speed and 93 acceleration. On D, Kenny Clark leads Green Bay’s pass rush at 90 overall with 95 strength with 92 block shedding and 89 power moves while Jaire Alexander is not far off at 89 overall to lead the Green Bay secondary at cornerback, with 92 man coverage in addition to 93 ratings in speed and acceleration with 94 agility. Za’Darius Smith and Adrian Amos come in at 88 and 87 overall respectively as well as a pair of key pieces in a loaded Packer defense.

I want to give Chicago and the points a look as the first two games in this division in the Sim Classic were decided by a combined 5 points. However, this was one of the rare matchups in the sim games that we got to see twice and Green Bay won both games by double-digits. I just think that Green Bay’s the better team here and just going with what we’ve seen so far, I’ll lay the points with Green Bay here.