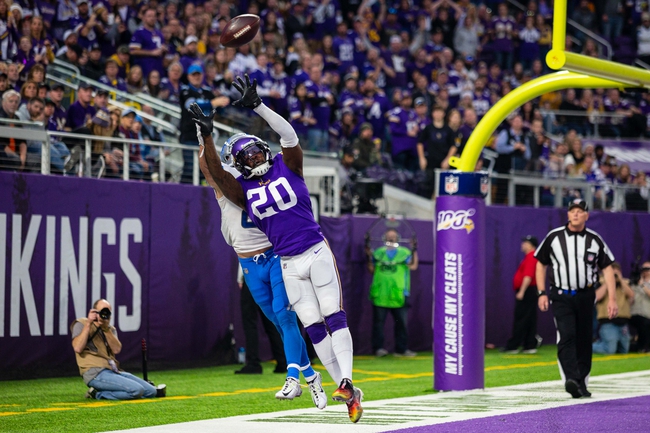 The Detroit Lions and the Minnesota Vikings meet in a Madden 20 NFL Sim Classic matchup on Thursday afternoon.

The Detroit Lions will look to rebound from a 37-34 opening loss to Green Bay in their last appearance. Kenny Golladay and Marvin Jones Jr. are still the top receiver duo for the Lions with Golladay at 86 overall and Jones Jr. at 85 overall with both possessing a 90 speed rating and a low-90s acceleration rating. Matthew Stafford remains the starting quarterback for the Lions with an 82 overall rating, including a 94 rated attribute in throwing power. On defense, Damon Harrison Sr. leads Detroit with an 89 overall rating, including a 95 grade in impact blocking and 92 in tackling as well as a 91 mark in block shedding. Darius Slay Jr. may not be with the Lions, but he still is on the team here and has high-80s ratings in man and zone coverage as well as low-90s ratings in speed, acceleration and agility.

The Minnesota Vikings will look to improve to 2-0 in Sim Classic play after an opening 29-27 win over Chicago last time out. Stefon Diggs isn’t a Viking in reality anymore, but he’s still with the team in this game with a 93 overall rating with 92 catching, 91 speed, 93 acceleration and 93 agility. Adam Thielen has a 91 overall rating another wide receiver spot with 90 speed and 93 grades in acceleration and agility as well. Thielen also has 95 catching and 90 catching in traffic. Dalvin Cook leads Minnesota’s ground attack at 90 overall with 91 speed, 92 acceleration and 94 agility while Kyle Rudolph is an 84 overall rated tight end and Kirk Cousins is 84 overall at starting quarterback. On the defensive end, Harrison Smith leads the Vikings at 95 overall with 93 power, 92 zone coverage, 95 play recognition and 93 pursuit. The Vikings have a group of 90 overall rated defenders, with Everson Griffen and Danielle Hunter sitting opposite on the D-line while Eric Kendricks hunkers down the linebacking corps. Linval Joseph also sits at 86 overall in the middle of the defensive line.

I’d give the Lions a chance here as anything can happen in these sim games that are coin flips even when you have a heavy favorite. However, we saw enough of a sample size with Detroit since we started covering these sim games that could suggest that Detroit’s just outmatched here. The Lions looked good in their opening game against Green Bay, but in the sims before the Classic, they lost each game against division opponents by double-digits, including a 38-17 loss to these same Vikings. I just think Minnesota’s the better team here, so I’ll lay the points with the Vikings in this spot.