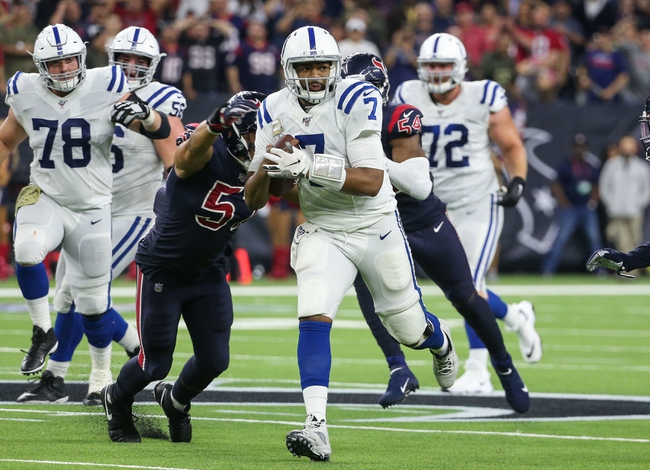 The Indianapolis Colts and the Houston Texans meet in a Madden 20 NFL Sim Classic matchup on Friday afternoon.

The Indianapolis Colts come into this game looking to bounce back from an opening loss to Tennessee by a final score of 24-19. T.Y. Hilton leads Indianapolis on offense with an 88 overall rating, with 93 speed as well as 95 agility and 91 acceleration. The Colts also have some stregnth up front with four offensive linemen with at least an 80 overall rating, led by Quenton Nelson who has a team-high 94 overall rating with a 99 awareness rating as well as 97 strength and 92 run blocking. On the defensive side, Justin Houston leads the Colts at 86 overall, including a 93 mark in play recognition while Darius Leonard sits at one of the outside linebacker spots with an 85 overall rating including an 88 rating in tackling.

The Houston Texans will try to build off of a 40-30 win over Jacksonville to start their Sim Classic. DeAndre Hopkins leads the Texans, rated 98 overall with 98 catching as well as 99 marks in catching in traffic, spectacular catch, release and jumping with 92 speed, 93 acceleration and 92 agility. Deshaun Watson is rated at 86 overall at starting QB with 88 acceleration, 84 speed and 89 throw power while Lamar Miller is close behind at 84 overall in the Houston backfield with 91 carrying, 89 juke, 92 speed, 91 agility and 91 acceleration. On defense, J.J. Watt leads at 97 overall with 97 strength, 94 impact blocking, 97 tackling, 93 finesse move and 94 power move. D.J. Reader and Justin Reid also come in at 84 overall for Houston’s defense with Reader on the defensive front and Reid in the secondary.

This is one of the rare circumstances since we started covering these sim games where the two teams have played each other not only once, but twice, and in those two games, the Colts only lost by one and beat the Texans outright, so the points could hold some value. However, Houston’s simply the better team here with the better rated players and we saw that come to fruition in the opening game against Jacksonville. I just think this is another game that the Texans bully their way through, so I’ll lay the points with Houston here.