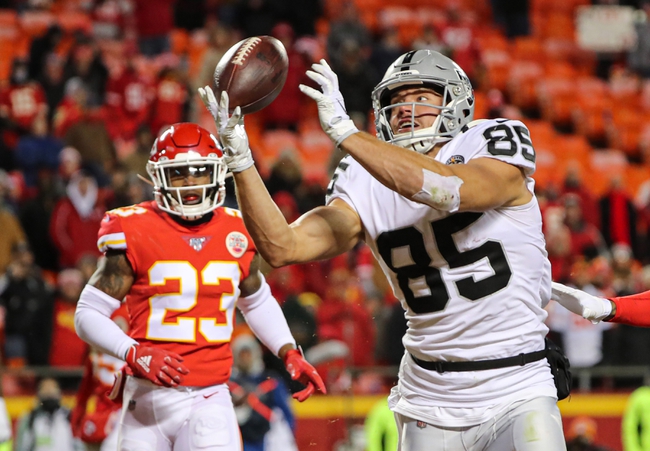 The Las Vegas/Oakland Raiders and the Kansas City Chiefs meet in a Madden 20 NFL Sim Classic matchup on Friday night.

The Las Vegas/Oakland Raiders will look to bounce back after kicking off their Sim Classic with a 33-30 loss to Denver in their last appearance. The Raiders’ strength lies on the offensive line with Rodney Hudson at 93 overall, Richie Incognito at 87 overall and Trent Brown at 86 overall. Josh Jacobs and Darren Waller each have 85 overall ratings, with Jacobs owning 96 carrying and 91 acceleration at running back while Waller has 89 speed, 89 acceleration and 96 catching at tight end. Tyrell Williams is the Raiders’ top wide receiver at 82 overall with 92 speed, 93 acceleration and 95 agility while Derek Carr is still the Raiders’ starting QB with an 80 overall rating. On defense, Lamarcus Joyner comes in with an 83 overall rating, including 88 speed and 92 acceleration, but after Joyner, every defender on the Raiders owns a 79 overall rating or lower.

The Kansas City Chiefs will try to bounce back from a 36-30 loss to the Chargers in their opening game. Patrick Mahomes comes into this one as one of the game’s five heralded 99 overall rated players, with 96 throwing power as well as 97 short pass accuracy, 95 medium pass accuracy and 93 deep pass accuracy. Tyreek Hill isn’t far off of the pace at the top at 96 overall, with a 91 attribute rating in catching along with 97 juke, 99 speed, 99 acceleration and 98 agility while Travis Kelce is also at 96 overall as Kansas City’s top tight end with attributes of 99 awareness, 85 speed. 91 catching in traffic and 91 catching overall. On defense, Chris Jones and Tyrann Mathieu share the team-high rank on the Chiefs’ unit with Jones leading the pass rush at 92 overall with 91 strength, 90 tackling, 89 finesse move and 95 power move while Mathieu anchors KC’s secondary at 92 overall with a 90 man coverage rating as well as 89 in zone coverage while also being rated at 90 speed, and 92 in acceleration and 92 agility.

The Chiefs giving up a lot of points makes sense on paper, but we’ve seen it a ton during these sim games that the Chiefs defense isn’t that great during these simulations, giving up at least 30+ points on a regular basis. On the other hand, the Raiders lost by 6 to the Chiefs in the first sim but then by 23 in the second. Which is why I’m going to side with the over. Both games saw 68 and 67 points and I think we could be in for another high scoring affair here.