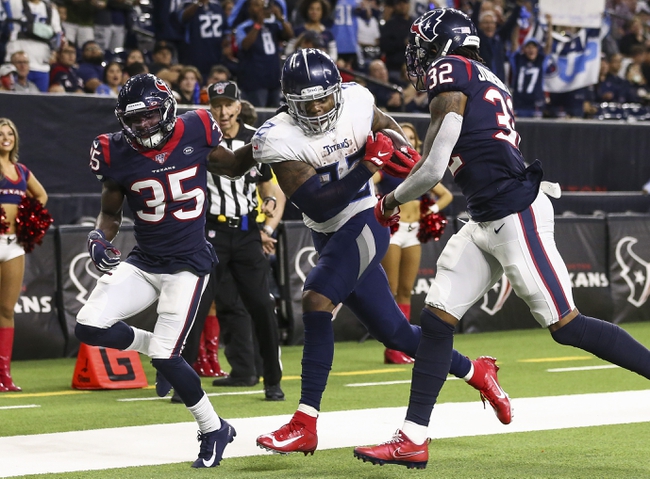 The Tennessee Titans and the Houston Texans meet in a Madden 20 NFL Sim Classic matchup on Monday afternoon. Click Here to BET This NFL Sim Game

The Tennessee Titans come into this one with a sim record of 1-1 after a 30-27 overtime loss to Jacksonville last time out. Derrick Henry leads the Titans with a 91 overall rating with 91 speed, 87 strength, 91 carrying and 98 stiff arm while Delanie Walker comes up at 86 overall as Tennessee’s top tight end with 86 catching. A.J. Brown and Corey Davis make up the top tandem at wide receiver, rated just 80 and 79 overall respectively, while Ryan Tannehill comes in at 80 overall at starting QB for the Titans. On defense, Kevin Byard shares the team-high rating on the defensive end at 91 overall with 93 zone coverage and 90 speed while Logan Ryan is at 86 overall at cornerback with 87 speed, 91 acceleration and 90 agility with 92 play recognition. Jurrell Casey also checks in at 85 overall at right defensive end with 92 play recognition, 89 tackling and 89 impact blocking as well as 92 strength.

The Houston Texans will look to bounce back after a 36-30 overtime loss to Indianapolis last time out. DeAndre Hopkins leads Houston, rated 98 overall with 98 catching as well as 99 marks in catching in traffic, spectacular catch, release and jumping with 92 speed, 93 acceleration and 92 agility. Deshaun Watson is rated at 86 overall at starting quarterback with 88 acceleration, 84 speed and 89 throw power while Lamar Miller is close behind at 84 overall in the Houston backfield with 91 carrying, 89 juke, 92 speed, 91 agility and 91 acceleration. On defense, J.J. Watt leads at 97 overall with 97 strength, 94 impact blocking, 97 tackling, 93 finesse move and 94 power move. D.J. Reader and Justin Reid also come in at 84 overall for Houston’s defense with Reader on the defensive line and Reid in the secondary.

In this division it’s win and you’re in, but the simulations don’t care about that. With that said, Houston’s the better team side-by-side, and they have the higher rated players, but that hasn’t stopped Tennessee from beating Houston twice during these sim matchups and we’ve seen enough of a sample size that suggests the Titans can get it done. I’ll take a shot with the Titans and put a little bit on Tennessee ML. Click Here to BET This NFL Sim Game