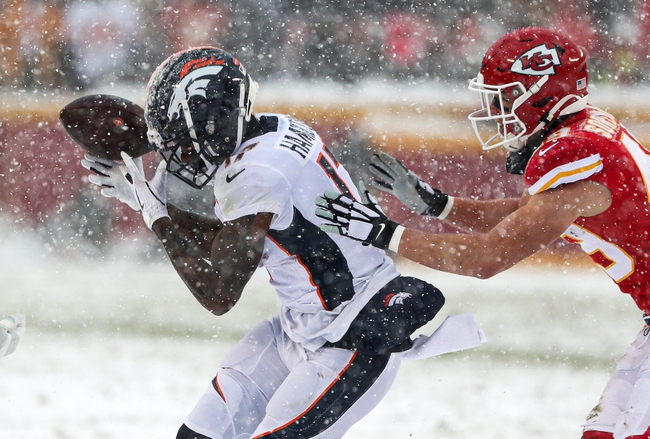 The Denver Broncos and the Kansas City Chiefs meet in a Madden 20 NFL Sim Classic matchup on Tuesday night.

The Denver Broncos come in with a Sim Classic record of 1-1 after a 55-24 loss to the Chargers in their last game. Phillip Lindsay leads the Broncos on offense with an 85 overall rating at RB with 93 carrying as well as 93 speed and 91 acceleration. Courtland Sutton is right behind as the Broncos’ top wideout with 89 speed, 92 acceleration and 92 catching as part of his 84 overall rating. On defense, Von Miller leads Denver with a team-high 96 overall rating, including 93 tackling, 89 impact blocking, 90 finesse move and 93 power move. Chris Harris Jr. is at corner at 90 overall with a 91 man coverage rating and 90 speed. Justin Simmons and Kareem Jackson make up a strong combination in the Denver secondary at 89 and 87 overall.

The Kansas City Chiefs also come in at 1-1 after a 47-44 win over the Raiders in their last game. Patrick Mahomes comes into this one as one of the game’s five players with a 99 overall rating, with 96 throwing power as well as 97 short pass accuracy, 95 medium pass accuracy and 93 deep pass accuracy. Tyreek Hill isn’t far off of the pace at the top of the list at 96 overall, with a 91 attribute rating in catching along with 97 juke, 99 speed, 99 acceleration and 98 agility while Travis Kelce is also at 96 overall as Kansas City’s top TE with attributes of 99 awareness, 85 speed. 91 catching in traffic and 91 catching overall. On defense, Chris Jones and Tyrann Mathieu share the team-high rank on the Chiefs’ group with Jones leading the pass rush at 92 overall with 91 strength, 90 tackling, 89 finesse move and 95 power move while Mathieu anchors KC’s secondary at 92 overall with a 90 man coverage rating as well as 89 in zone coverage while also being rated at 90 speed, and 92 in acceleration and 92 agility.

I get the Chiefs being heavy favorites here, but the problem I have with it is that KC has given up 30-40 points on a regular basis, and a lot of times in these sim matchups, it’s cost them in the win-loss column. I just think there’s enough here to suggest that Denver can keep it close if not win it outright so I’ll take a shot with Denver and the points as well as sprinkling a little bit on Denver ML.