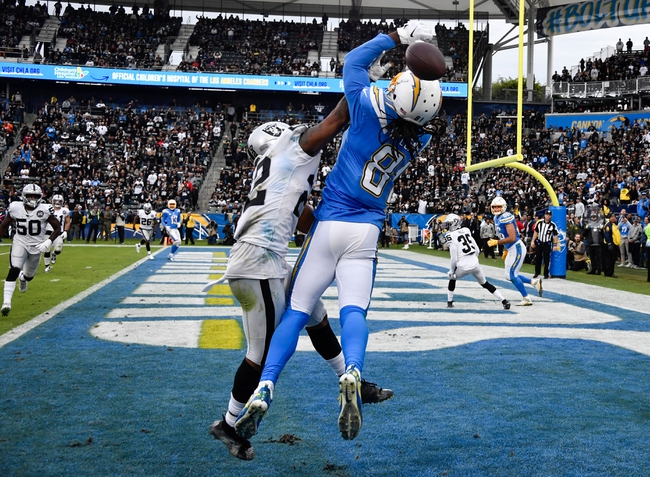 The Los Angeles Chargers and the Oakland Raiders meet in a Madden 20 NFL Sim Classic matchup on Tuesday night.

The Los Angeles Chargers come in with a 2-0 record after punching their ticket to the knockout rounds with a 55-24 win over Denver last time out. Keenan Allen leads Los Angeles at 92 overall with 90 catching and 94 catching in traffic in addition to 89 speed, 92 acceleration and 92 agility while Hunter Henry is L.A.’s top tight end at 87 overall with 89 catching as well. Melvin Gordon III and Philip Rivers aren’t on the Chargers in reality anymore, but they’re still on Los Angeles in this game at 84 overall with Gordon rated at 92 speed and 92 agility with 90 carrying and 90 juke while Rivers has 94 short pass accuracy and 92 medium pass accuracy. On defense is where the Chargers are keeping their top-rated players with Joey Bosa leading the defensive push at 91 overall with 90 impact blocking as well as 97 finesse move and 87 strength while Casey Hayward Jr. is at 91 overall in the secondary with 91 acceleration and 92 agility in addition to 89 speed and 90+ ratings in man coverage and zone coverage. Melvin Ingram III and Derwin James Jr. each come in at 88 overall on the defensive end for the Chargers.

The Oakland Raiders will try to salvage a win after falling to 0-2 in the Sim Classic with a 47-44 loss to Kansas City in their last outing. The Raiders’ strength lies on the O-line with Rodney Hudson at 93 overall, Richie Incognito at 87 overall and Trent Brown at 86 overall. Josh Jacobs and Darren Waller each have 85 overall ratings, with Jacobs owning 96 carrying and 91 acceleration at RB while Waller has 89 speed, 89 acceleration and 96 catching at TE. Tyrell Williams is the Raiders’ top wideout at 82 overall with 92 speed, 93 acceleration and 95 agility while Derek Carr is still the Raiders’ starting QB with an 80 overall rating. On defense, Lamarcus Joyner comes in with an 83 overall rating, including 88 speed and 92 acceleration, but after Joyner, every defender on the Raiders owns a 79 overall rating or lower.

I’d like to say it’d be nice to see the Raiders get a win in what’s a nothing game here, but the fact is that the Chargers are a team that I’ve been high on since we started covering these sim matchups and the Raiders just have a bunch of issues on defense that the Chargers’ higher-rated players will be able to exploit. I’ll lay the field goal with the Chargers here.