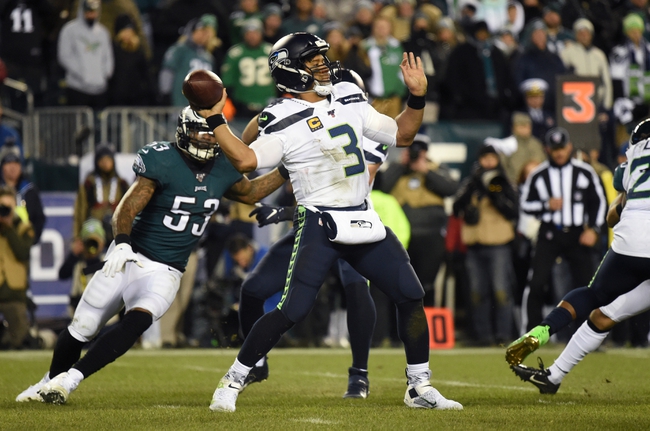 The Seattle Seahawks and the Philadelphia Eagles meet in a Madden 20 NFL Sim Classic matchup on Wednesday night.

The Seattle Seahawks come into the knockout rounds with a Sim Classic record of 2-1 after a 26-20 loss to San Francisco in their last game. Russell Wilson leads the Seahawks’ offense with a solid 97 overall rating with 86 speed, 90 acceleration and 93 agility as well as 91 throwing power and 93 short pass accuracy, 94 medium pass accuracy and 96 deep pass accuracy. Tyler Lockett is #1 WR for Seattle with an 88 overall rating including 93 catching, 93 speed, 92 acceleration and 97 agility while Chris Carson also has an 86 rating in leading Seattle’s backfield with 88 speed, 89 acceleration and 91 stiff arm. On the defense, Bobby Wagner is the Seahawks’ top defender with a 98 overall rating, with 96 tackling, 90 impact blocking, 98 power, as well as high-90s attribute ratings in pursuit and play recognition. Jadeveon Clowney is right behind on the d line at 88 overall with 95 pursuit, 91 play recognition, 87 speed and 90 acceleration.

The Philadelphia Eagles punched their ticket to the knockout round with a perfect 3-0 Sim Classic record after a 29-27 win over Dallas last time out. Zach Ertz leads Philadelphia’s offense with a 90 overall rating with 87 acceleration and 93 catching while Alshon Jeffery and DeSean Jackson make up the Eagles’ top receiving pair at 85 and 84 overall respectively. Carson Wentz is starting QB for Philly at 83 overall while the Eagles’ top rated players are on the right side of their offensive line with Jason Kelce at center with a 94 overall rating, Brandon Brooks at 93 overall at right guard and right tackle Lane Johnson at 89 overall. On the defensive side, Fletcher Cox leads the Eagles at 95 overall with 95 strength, 93 tackling and 96 power move while Brandon Graham is right defensive end at 87 overall with 90 power move and 93 impact blocking. Malcolm Jenkins leads the Eagles’ secondary at 86 overall with 91 acceleration, 90 agility and 88 zone coverage.

The Eagles getting points after running through the rest of the NFC East in the group stage is tempting, but the problem is that Philadelphia played the Seahawks earlier during these sim games and it was Seattle that hung 52 points on the board and won by 3 TDs against Philadelphia. I just like what Seattle brings to the table and I like them more than I do the Eagles, so I’ll lay the points with Seattle in this one.