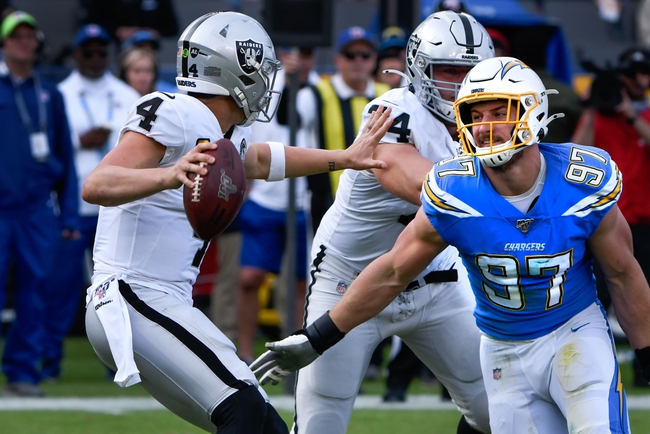 The New York Jets and the Los Angeles Chargers meet in a Madden 20 NFL Sim Classic matchup on Thursday afternoon.

The New York Jets come into this game with a Sim Classic record of 2-1 after a 30-19 win over the Dolphins in their last game. Le’Veon Bell leads the Jets on offense at 88 overall, including 89 speed, 92 acceleration and 95 agility as well as 88 carrying and 91 juke. Robby Anderson leads New York’s receiving group at 84 overall with 91 catching while Sam Darnold is 74 overall as New York’s starting QB. On the defense, Jamal Adams leads New York with a 92 overall rating, with 95 power and 92 zone coverage as well as 91 speed and 90 acceleration. The Jets also possess a pair of 85 overall rated middle linebackers in C.J. Mosley and Avery Williamson, with both possessing 89 acceleration and Mosley having 91 tackling while Williamson has 86 block shedding.

The Los Angeles Chargers come in with a Sim Classic record of 2-1 after a 31-28 loss to Oakland last time out. Keenan Allen leads the charge for the Chargers at 92 overall with 90 catching and 94 catching in traffic in addition to 89 speed, 92 acceleration and 92 agility while Hunter Henry is L.A.’s top TE at 87 overall with 89 catching as well. Melvin Gordon III and Philip Rivers aren’t on the Chargers in reality anymore, but they’re still on L.A. in this game at 84 overall with Gordon rated at 92 speed and 92 agility with 90 carrying and 90 juke while Rivers has 94 short pass accuracy and 92 medium pass accuracy. On defense is where the Chargers are hiding their top-rated players with Joey Bosa leading the defensive push at 91 overall with 90 impact blocking as well as 97 finesse move and 87 strength while Casey Hayward Jr. is at 91 overall in the secondary with 91 acceleration and 92 agility in addition to 89 speed and 90+ ratings in man coverage and zone coverage. Melvin Ingram III and Derwin James Jr. each come in at 88 overall on the defensive end for the Chargers.

The points with the Jets are tempting, but the Jets’ winning sim games over a disappointing Buffalo team and a bad Miami team doesn’t do a whole lot for me really. Los Angeles has been a team I’ve been high on during these sim games and it’s paid off more often than not and the Chargers had to come through a tougher road despite a loss to the Raiders in their final group stage game. I just like what I’ve seen from L.A. more than what I’ve seen from the Jets, so I’ll lay the points with the Chargers here.