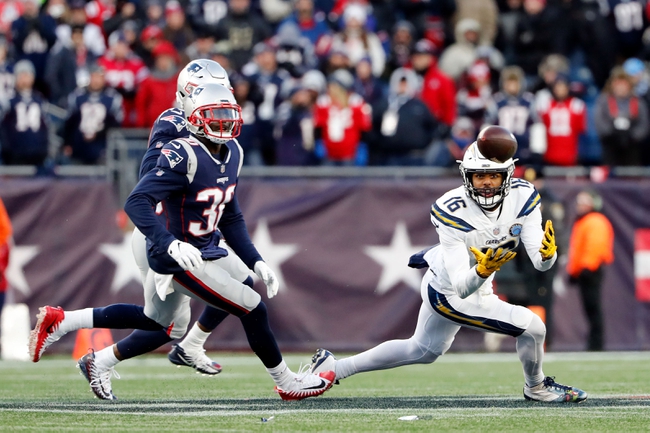 The Los Angeles Chargers and the New England Patriots meet in a Madden NFL 20 Sim Classic matchup on Saturday afternoon.

The Los Angeles Chargers come into this one looking to build off of a 34-27 win over Baltimore in their last game. Keenan Allen leads the Chargers at 92 overall with 90 catching and 94 catching in traffic to go along with 89 speed, 92 acceleration and 92 agility while Hunter Henry is the top TE for the Chargers at 87 overall with 89 catching as well. Melvin Gordon III and Philip Rivers aren’t on the Chargers in real life anymore, but they’re still on L.A. in this game at 84 overall with Gordon rated at 92 speed and 92 agility with 90 carrying and 90 juke while Rivers has 94 short pass accuracy and 92 medium pass accuracy. The Chargers have some top-tier players on the defensive end, with Joey Bosa leading the defensive push at 91 overall with 90 impact blocking as well as 97 finesse move and 87 strength while Casey Hayward Jr. is at 91 overall in the secondary with 91 acceleration and 92 agility in addition to 89 speed and 90+ ratings in man coverage and zone coverage. Melvin Ingram III and Derwin James Jr. each come in at 88 overall on the defensive end for the Chargers.

The New England Patriots on the other hand come in after a 55-17 beatdown victory over Pittsburgh in their last outing. Tom Brady leads the Patriots under center in this game with a 91 overall rating with 90 throw power and 96 short pass accuracy while Julian Edelman is the top dog in New England’s receiving group at 87 overall with 91 acceleration, 91 agility and 85 catching. James White leads the New England rushing attack at 83 overall with 89 speed, 92 acceleration and 90 agility. On defense, Stephon Gilmore head-mans New England with a 98 overall rating with 99 awareness and 92 speed with 94 acceleration and 94 agility while also rated at 98 in man coverage and 96 in zone coverage. Devin McCourty is New England’s second-highest rated DB at 92 overall with 93 zone coverage and 90 marks across the board in speed, agility and acceleration. Dont’a Hightower leads New England’s linebacking corps at 88 overall with 91 impact blocking and 92 tackling in addition to 93 play recognition and 93 pursuit.

I’ll admit as a Patriots fan I was wrong, as I thought the Steelers would keep things close against New England as I hadn’t overly liked what I had seen from New England over the course of the Sim Classic. With that said, the Chargers once again, are a team I love in these sim games, and they showed why again, not only covering against the Ravens, but winning outright. The Chargers are just that team that’s not going away and are a sim Cinderella if you will. This could be where the clock strikes midnight for the Chargers, but there’s too much value here to pass on in the meantime. I’ll take the Chargers and the points and put a bit on the Chargers ML as well.