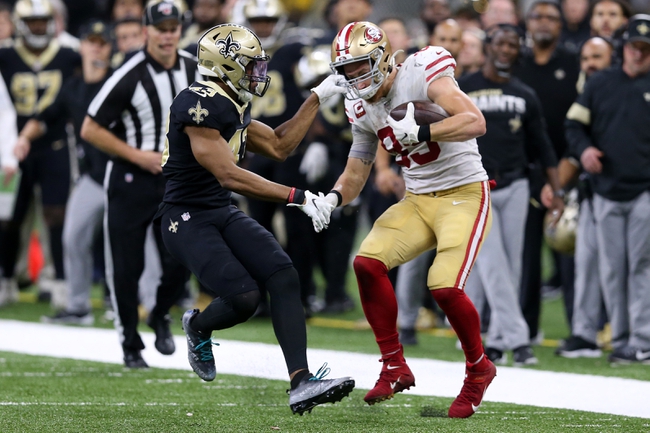 The San Francisco 49ers and the New Orleans Saints meet in a Madden 20 NFL Sim Classic matchup on Saturday night.

The San Francisco 49ers come into this one looking to build on a narrow 13-10 win over the Bears in their last appearance. George Kittle leads the offense for San Francisco as a 97 overall rated tight end with 98 catching while Emmanuel Sanders comes in as the top wide receiver for the Niners at 89 overall with 94 catching, 92 acceleration and 93 agility. Jimmy Garoppolo is starting QB for the 49ers at 84 overall while Tevin Coleman is right behind at RB at 82 overall with 93 speed, 92 acceleration and 93 agility. On the 49ers’ defensive unit, Richard Sherman leads the way at 94 overall at CB, with 99 awareness as well as 98 jumping, 90 man coverage and 99 zone coverage. Nick Bosa fronts the 49ers’ pass rush at 89 overall with 91 finesse move and 91 acceleration. The San Francisco defense also has four additional defenders with at least an 85 overall rating, including Arik Armstead, DeForest Buckner, Dee Ford and Fred Warner.

The New Orleans Saints come into this one looking to build off of a 47-27 win over Seattle in their last matchup. Michael Thomas leads the Saints as one of Madden’s five highly-regarded 99 overall rated players, with 89 speed, 92 acceleration and 92 agility as well as 99 catching, 98 catching in traffic and 97 spectacular catch with 96 release and 93 jumping. Drew Brees starts under center for New Orleans at 94 overall with 99 short pass accuracy, 97 medium pass accuracy and 91 deep ball accuracy and Alvin Kamara leads the Saints at running back with an 89 overall rating, including 94 acceleration, 93 agility, 90 carrying and 90 juke while Jared Cook is at 87 overall with 90 acceleration and 85 catching. On the defense, Cameron Jordan leads the way for New Orleans’ D-line at 92 overall with 92 impact blocking, 89 tackling and 94 finesse move. Demario Davis is at 89 overall at outside linebacker with 90 play recognition and 90 pursuit as well as 86 speed and 89 acceleration. Marcus Williams and Marshon Lattimore also make up a big chunk of the New Orleans secondary at 86 and 85 overall.

This feels like a hard one to call, and rightfully so with the line being at a pick ‘em. With that said, San Fran has been solid in these sim matchups, but the 49ers have been far from convincing in these last couple of games, barely scraping by and they’ve had their fair share of close calls in the Sim Classic. New Orleans just beat the crap out of Seattle and the Saints just look downright scary on both ends of the ball right now. I’ll side with the Saints in this pick ‘em scenario.