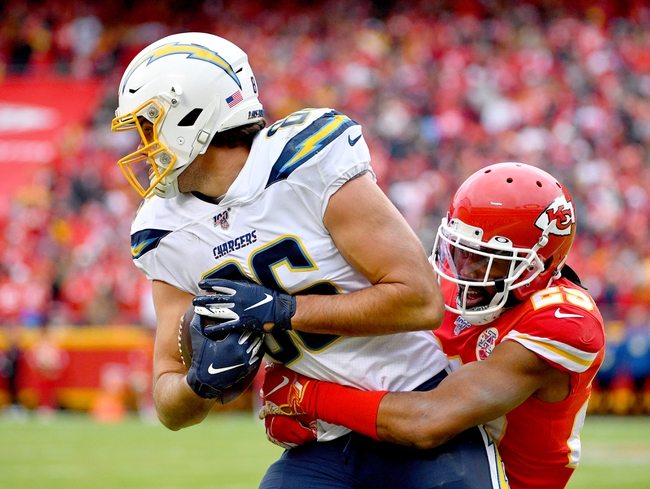 The Los Angeles Chargers and the San Francisco 49ers meet in the 3rd place game of the Madden 20 NFL Sim Classic on Sunday afternoon.

The Los Angeles Chargers will try to bounce back from a 28-25 loss to the New England Patriots in their last game. Keenan Allen leads L.A. at 92 overall with 90 catching and 94 catching in traffic with 89 speed, 92 acceleration and 92 agility while Hunter Henry is the top option at tight end for the Chargers at 87 overall with 89 catching as well. Melvin Gordon III and Philip Rivers aren’t on the Chargers in real life anymore, but they’re still on L.A. in this game at 84 overall with Gordon rated at 92 speed and 92 agility with 90 carrying and 90 juke while Rivers has 94 short pass accuracy and 92 medium pass accuracy. The Chargers have some highly-rated players on the defensive end, with Joey Bosa leading the defensive push at 91 overall with 90 impact blocking as well as 97 finesse move and 87 strength while Casey Hayward Jr. is at 91 overall in the secondary with 91 acceleration and 92 agility in addition to 89 speed and 90+ ratings in man coverage and zone coverage. Melvin Ingram III and Derwin James Jr. each come in at 88 overall on the defensive end for the Chargers.

The San Francisco 49ers will look to rebound as well after a 31-27 loss to New Orleans in their last game. George Kittle leads the offense for the Niners as a 97 overall rated tight end with 98 catching while Emmanuel Sanders comes in as the top wide receiver for San Fran at 89 overall with 94 catching, 92 acceleration and 93 agility. Jimmy Garoppolo is starting quarterback for the 49ers at 84 overall while Tevin Coleman is right behind at RB at 82 overall with 93 speed, 92 acceleration and 93 agility. On the 49ers’ defensive unit, Richard Sherman leads the way at 94 overall at CB, with 99 awareness as well as 98 jumping, 90 man coverage and 99 zone coverage. Nick Bosa fronts the 49ers’ pass rush at 89 overall with 91 finesse move and 91 acceleration. The San Francisco defense also has four additional defenders with at least an 85 overall rating, including Arik Armstead, DeForest Buckner, Dee Ford and Fred Warner.

I was wondering if the 49ers would play in enough close games that it would catch up with them in these sim games and it did, but it only caught up because the Niners blew a 20-6 halftime lead. On the other side, Los Angeles lost, but once again, the Chargers held their own, and hung around untilt eh end with a Patriots team that’s one of the best in this game. I’ve made a ton blindly backing the Chargers since these sim games started and with one game left in the Sim Classic, why not go to the well one more time. I’ll take the Chargers and the points here.