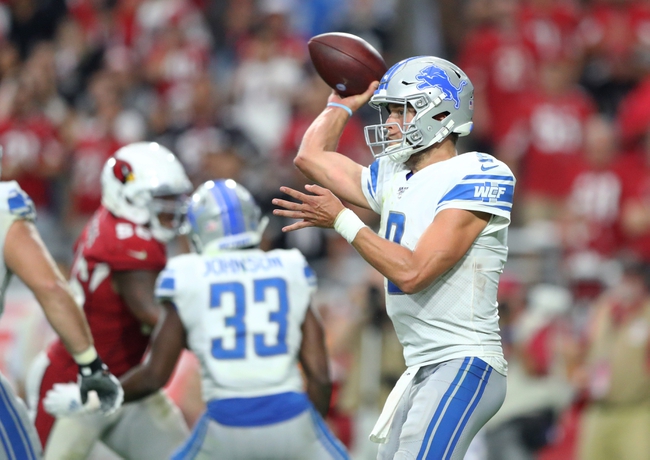 The Arizona Cardinals and the Detroit Lions meet in a Madden 20 NFL simulation game on Tuesday afternoon.

The Arizona Cardinals come into this one looking to build off of a decent 1-2 showing in the Sim Classic in which their two losses were decided by just four points. Larry Fitzgerald leads Arizona’s offense at 83 overall at WR with a 93 catch rating and 91 catching in traffic while Kenyan Drake sits at 81 overall in Arizona’s backfield with 91 speed, 89 acceleration, 90 agility and 87 carrying grades. Kyler Murray is Arizona’s starting quarterback at 75 overall with 91 speed, 92 acceleration and 90 agility as well as 89 throwing power. On the defense, Chandler Jones leads the Cardinals with a 90 overall rating, including 92 power move and an 86 tackle rating while Patrick Peterson is at 92 overall with 92 speed, 92 acceleration, 95 agility and 89 man coverage at CB.

The Detroit Lions enter this game looking to rebound after going 0-3 in the Sim Classic with a pair of losses by double-digits to finish off the round robin. Kenny Golladay and Marvin Jones Jr. are the top receiver pairing for the Lions with Golladay at 86 overall and Jones Jr. at 85 overall with both having a 90 speed rating and a low-90s acceleration rating. Matthew Stafford is Detroit’s starting quarterback with an 82 overall rating, including a 94 attribute rating in throwing power. On the defensive side of the ball, Damon Harrison Sr. leads Detroit with an 89 overall rating, including a 95 grade in impact blocking and 92 in tackling as well as a 91 mark in block shedding. Darius Slay Jr. may not be with the Lions anymore, but he still is on the team here and has high-80s ratings in man and zone coverage as well as low-90s ratings in speed, acceleration and agility.

Detroit and the points is tempting as Detroit’s shown that their offense is capable of going off at any time. However, I really like what I’ve seen from the Cardinals during these sim games, as the defense holds solid and the offense can pull their weight as well. We also saw Arizona’s defense hold up against stiff NFC West opponents while Detroit crumbled against the rest of the NFC North. I’ll lay the points with Arizona here.