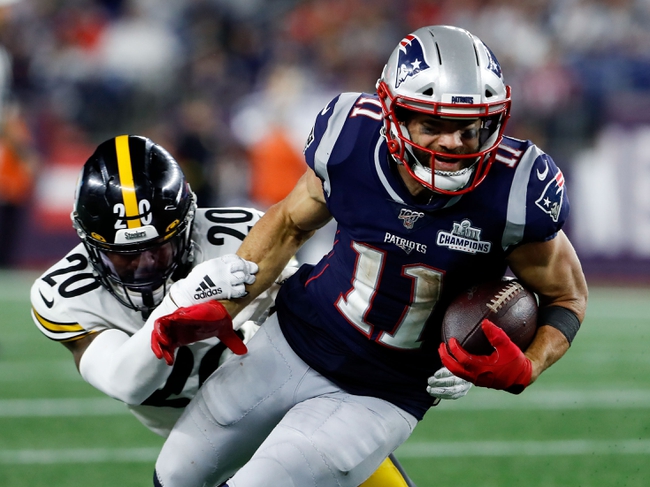 The Pittsburgh Steelers and the New England Patriots meet in a Madden 20 NFL simulation game on Tuesday night.

The Pittsburgh Steelers come into this one looking to pick up some steam after a decent run in the Sim Classic, making it to the conference semifinals before being stopped by these same New England Patriots. JuJu Smith-Schuster leads Pittsburgh on offense at WR with an 86 overall rating, which includes a rating of 91 speed and 92 acceleration as well as 90 catching and 93 catching in traffic while James Conner is Pittsburgh’s leader in the ground attack with an 81 overall rating with 86 speed, 89 acceleration and 89 carrying. Ben Roethlisberger is the starting QB with an 81 overall rating with 89 throwing power and 89 short passing accuracy. On the defense, Cameron Heyward leads Pittsburgh rated at 90 overall with 93 strength, 91 tackling and 92 power move while Stephon Tuitt is on the other side of the front at 87 overall with 90 block shedding and 91 strength.

The New England Patriots come into this one as the champions of the Sim Classic, taking down New Orleans in the championship game by a final score of 25-20. Tom Brady leads New England at quarterback in this game with a 91 overall rating with 90 throw power and 96 short pass accuracy while Julian Edelman is the #1 in New England’s receiving group at 87 overall with 91 acceleration, 91 agility and 85 catching. James White leads the Patriots’ rushing attack at 83 overall with 89 speed, 92 acceleration and 90 agility. On defense, Stephon Gilmore leads New England with a 98 overall rating with 99 awareness and 92 speed with 94 acceleration and 94 agility while also rated at 98 in man coverage and 96 in zone coverage. Devin McCourty is New England’s second-highest rated CB at 92 overall with 93 zone coverage and 90 marks across the board in speed, agility and acceleration. Dont’a Hightower leads New England’s linebacking group at 88 overall with 91 impact blocking and 92 tackling in addition to 93 play recognition and 93 pursuit.

I have said before these sim games are all about which simulation you catch for the bet, as you could have a team win 99 times out of 100, but if you bet on that one time, it could make you or break you. With that said, these two teams just played in a semifinal of the Sim Classic, and New England won that game by a count of 55-17. Pittsburgh’s offense has shown up more often than not here, but New England won the Sim Classic for a reason and I just think we have to go off of the sample size we have here. I’ll lay the points with New England here.