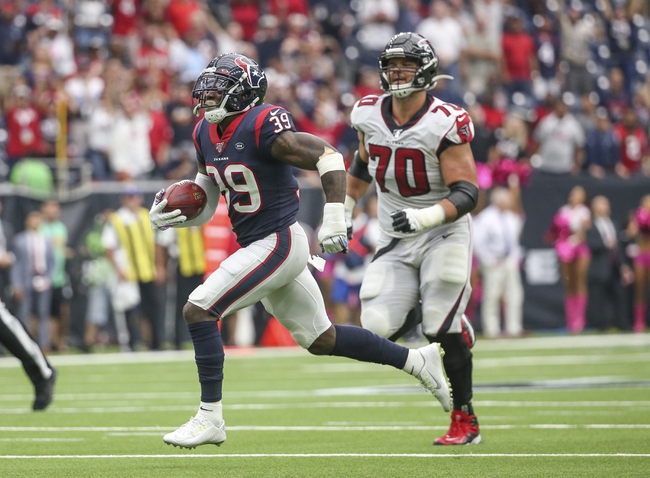 The Houston Texans and the Atlanta Falcons meet in a Madden 20 NFL simulation game on Tuesday afternoon.

The Houston Texans come into this match trying to build off of a decent showing in the Sim Classic, losing in the quarterfinals to the Pittsburgh Steelers after a 2-1 record in the group stage. DeAndre Hopkins leads Houston, rated 98 overall with 98 catching as well as 99 marks in catching in traffic, spectacular catch, release and jumping with 92 speed, 93 acceleration and 92 agility at WR. Deshaun Watson is rated at 86 overall as Houston’s starting quarterback with 88 acceleration, 84 speed and 89 throw power while Lamar Miller is close behind at 84 overall in the Texans’ backfield with 91 carrying, 89 juke, 92 speed, 91 agility and 91 acceleration. Defensively, J.J. Watt leads the way at 97 overall with 97 strength, 94 impact blocking, 97 tackling, 93 finesse move and 94 power move. D.J. Reader and Justin Reid also come in at 84 overall for Houston’s defense with Reader on the defensive line and Reid in the secondary.

The Atlanta Falcons enter this game looking to build on their own decent showing in the Sim Classic, finishing with a 2-1 group record, losing in the quarterfinals to the Chicago Bears. Julio Jones leads Atlanta with a 97 overall rating, with 92 speed and 94 agility to go along with 96 catching, 95 catching in traffic and 98 spectacular catch. Austin Hooper is rated 89 overall at TE with 97 catching while Matt Ryan comes in at 87 overall as Atlanta’s starting QB and Devonta Freeman leads the rushing attack for Atlanta with an 85 overall rating with 92 speed and 94 agility. On defense, Grady Jarrett leads Atlanta with a 90 overall rating with 89 strength, 90 block shedding and 93 power move while Deion Jones is the Falcons’ top linebacker at 86 overall with 89 pursuit, 90 speed and 91 acceleration. Keanu Neal and Desmond Trufant lead the Falcons’ secondary at 85 and 84 overall respectively with Trufant logging 92 speed, 93 acceleration and 96 agility.

This game could go either way, which is why the line is as tight as it is, but for me, Houston’s had a tendency to disappoint in these sim matchups, while Atlanta has had a better run of play as of late. I think this simply boils down to me not liking Houston and liking Atlanta just a bit more, so I’ll lay the points with the Falcons here.